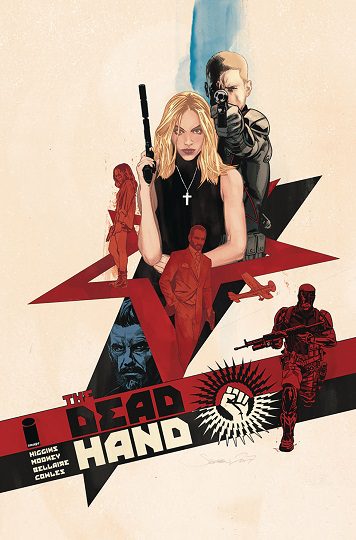 Soooo….The Dead Hand… Jesus, why are all the books I’m reading today about Russia? I smell collusion. *Side eyes Image Comics*

Within its first few pages, The Dead Hand left me expecting very little of it. Between Carter Carlson’s alliterative name, his costume design reminiscent of 90s era Marvel antiheroes complete with pouch belts, and the fact that, to be real with you, I’ve already been burned by one book today; my eyes were rolling so hard I nearly missed the rest of the book.

The Dead Hand takes an overused trope since before and during my childhood in the nineties, cold-war espionage featuring Russians as the big bads, and completely subverts it in an incredibly clever way that I will opt not to elaborate on so as not to spoil things for you; but trust me, you’re gonna wanna make it to the end of this issue (though you’ll have little to no trouble doing so once you begin).

Said alliterative-name-bearing Carter Carlson starts on a black ops mission at the end of the Cold War, discovering that his target’s shenanigans have been moved off-site and the remaining workers are making vacuums and refrigerator parts. Unfortunately, Sergei, one of the workers, has had enough and begins to blab about the real operation, The Dead Hand.

After this we’re treated to some backstory about Carter; how he grew up wanting to be a superhero, which leads to his joining the military and later becoming a covert operative. All of this exposition leads us into the present day, where Carter is now the sheriff of a pleasant small town called Mountain View. The idyllic small-town atmosphere appears at first to be where Carter left it all for the simple life until a weary traveler hikes down the mountain and this entire setting is turned upside down.

The twist that this leads in to is one I genuinely did not see coming and adds necessary folds to keep a story like this fresh. Where this could have been a generic “hey remember when the Russians were the villains?” kind of throwback tale, The Dead Hand offers a fresh angle that provides a cliffhanger which will almost certainly bring you back for a second issue.

All this red really shouldn’t work, but it does

Coupled with Stephen Mooney and Jordie Bellaire’s art, this book is a stellar first issue. Mooney excels, especially in his facial expressions, giving the characters a lot of life. Bellaire’s work is as on par as any project she is on, giving context to each scene through the use of color. Dark scenes are dark, while the town of Mountain View is presented in bright warm colors. Even Carter’s dumb costume looks great, regardless of my initial eye-roll. Maybe that was the point, who’s to say?

Dear editors: Don’t you dare touch this image. I don’t care if it’s too tall. The people need to see this. It’s like a Rob Liefeld fever dream.

Regardless, I will most certainly be returning for the second issue of this series, and not just because we need more reviews on the site. The Dead Hand‘s final page compels me to.