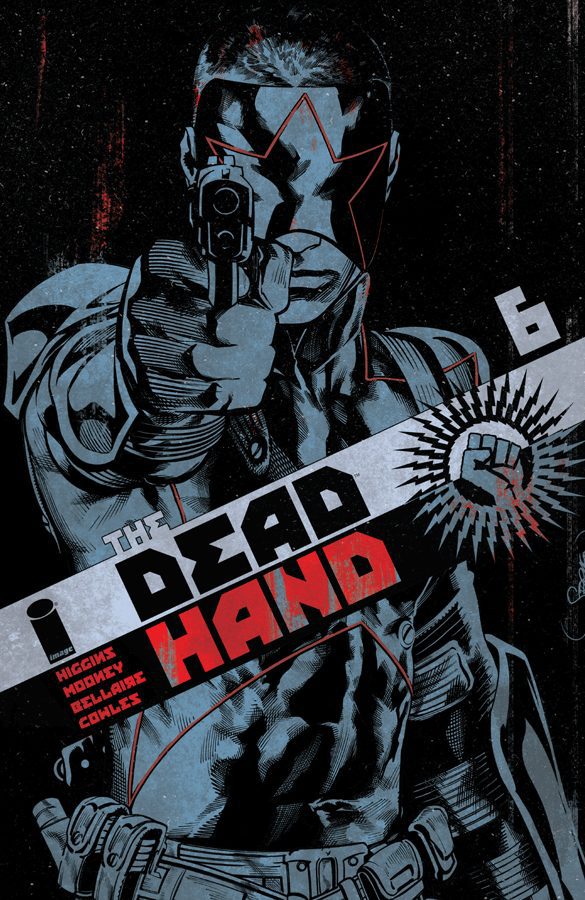 The Dead Hand has now come to an end with issue #6. Before we are taken where we left off in the last issue, we’re first introduced a bit more of a backstory of Vil prior to him meeting Ellis to go to the town Mountain View. This plays into the ultimate motive that Vil has once he arrived in the town and shows why he actually came. The confrontation Ellis has with Carter and Ranae goes in ways I thought it would but certain things definitely didn’t. With Vil essentially taking over in this issue as the antagonist, it places everyone else in the protagonist slot so that they make sure nuclear fallout doesn’t happen. I’m pretty mixed on how things went as far as Ellis getting his missing friend case with Frederick resolved. This is because since Vil wanted to go and set off the A.I. Roger, everything else essentially takes a back seat. Vil also at this point just comes off more as a bitter old man, but when you take into consideration all he did for his country and not happy with how he sees the world.

I can see how that would drive him upset in wanting to destroy it as he feels he gave so much of his life all for nothing, at least that’s how he sees it. I think a majority of the ending is quite enjoyable though. We aren’t sure what is going to happen with the rest of the town but our main characters in Mountain View are finally open to going back out in the world to see how things are and Harriet is, of course, the most excited in all of this.

The art team here still does a remarkable job with how everything is presented as if it’s being shot through a lens with a dark filter. There’s a great splash page of Vil showcasing his skills and the final page is a great brightness of hope and excitement for our characters as their story comes to a close.   Also, the lettering here is done really well with all the external exposition given and never feeling confused in the order of what to read as there are times when word bubbles aren’t clear on whose turn it is to speak form other series I’ve read. The Dead Hand is quite an espionage thrill ride to read. I think if this issue was just a bit longer we could’ve gotten some more proper closure, especially on how Ellis deals with Frederick’s death. Current readers will find themselves mixed on certain choices here but it still ends up being a series I recommend for others that missed out on it for when the trade comes out.