The next part of The Button storyline finds ninety year old Johnny Thunder standing on the roof of his elder care center screaming at the heavens to be hit by a thunderbolt and pleading to anyone that he didn’t want any of this to happen and that it’s his fault that they lost the Justice Society. Then the voice over from Barry recounts his love of the study of forensics as we get a replay of the events that took place at the end of Batman #21. Barry is at the scene of a new crime scene, the Batcave and the victim is (was) Eobard Thawne (I implore you to pick up the first part of this story because it was so brilliant that it is worth reading on its own and in context with the rest of the narrative).

Barry continues his voice over to go over the evidence that he is collecting. He worries that someone who could kill Reverse-Flash could be incredibly powerful. As he and Alfred try to pull as much information from the fried computers, Barry determines that, to get the answers he needs, he’s going to have to interview the 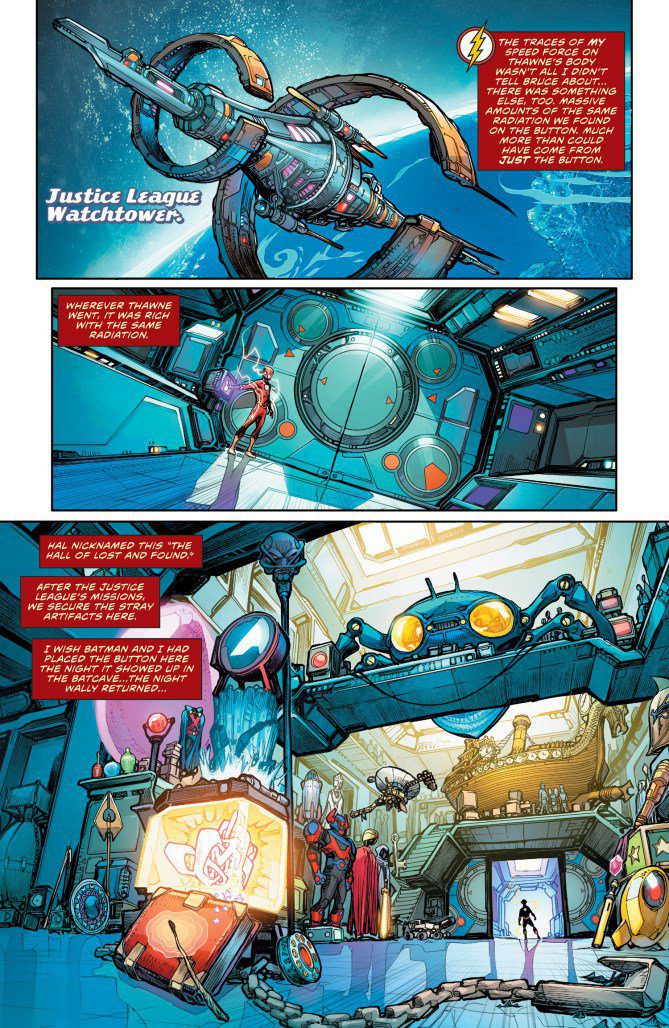 only witness: Batman. As he interviews Bruce, he recounts the unique friendship the two men share, especially their love of forensics. Thawne’s unique vibrational pattern means he could have gone anywhere in time before he was hurled back to the cave where he died. Making the mystery of his death more compelling and more intriguing for the audience.

Bruce and Barry narrow down the clues to the buttons reaction to Psycho-Pirate’s Mask and Bruce recounts what he saw and what it might mean. It’s interesting to see Bruce in a vulnerable state and comforting Barry as he takes responsibility for circumstances that might not be his doing alone. Bruce, intuitively, has a sense that Barry is keeping something from him, which he is. The next part of the investigation leads Barry to the Watchtower and, more specifically, a hall of artifacts collected from previous Justice League missions that DC Comics fans might recognize. Barry decides to use a device that he swore he would never use again to try and find answers to the questions that are plaguing him about the fate of Thawne and Wally’s ominous words when he returned.

As Barry prepares to go, Batman catches up to him and the two begin a harrowing journey through the speed force. They see visions of incidents from the past that they can’t place, but we all know and their journey comes to a crashing end in a location both alien and familiar to Batman fans and a meeting that is both touching and foreboding at the same time.

The Button continues to shape up to be an amazing journey through the DC universe with twists and turns that are unexpected. The end of issue reveal came completely out of nowhere for me and it will be interesting to see how it plays out. Williamson does and amazing job of keeping the narrative moving, but giving enough exposition to remind readers of the fact that Barry Allen is a scientist. Howard Porter’s artwork is really done well in the action scenes and I love his detailed backgrounds. If there was one thing that didn’t work for me was the expressions on the characters faces. They never really popped for me, even Bruce’s face on the last page of the issue seemed flat. Other than that, everything in this story works well and I can’t wait for the continuation in the next issue of Batman.