Our favorite lyrical superheroes from the DCTV universe slide onto center stage on The Flash with a 5,6,7,8 to belt out some stellar songs, and deliver an incredible episode this week! I’ll admit that while I was preparing to watch the musical crossover episode between The Flash and Supergirl, as they took on the lyrical nemesis the Music Meister, the end result was not at all what I had in mind. There are very few complaints I had with this week’s episode of The Flash.  The overwhelming majority of the episode was incredible! The concept was creative and smart. The sets and costume designs were absolutely beautiful. The songs; holy smokes the songs and the voices on the DCTV cast are so incredible that they would move Batman to a smile. All the comic fans know exactly how hard that would be.

I know many critiqued the concept of a musical episode, thinking it was forced and had no place in the show. Keeping in mind how poignant and memorable  ‘Once More, With Feeling’ on Buffy The Vampire Slayer was for that show; my original impression of what the Music Meister was going to do would have worked great. However, this new revamped version worked just as well,  made sense with the current storylines of both shows, and even added a little extra pizzazz!

This ain’t your mama’s Batman the Brave and the Bold animated series Music Meister folks! Instead of the telepathic pied piper who controlled the minds of his opponents, forcing them do his biding while they engaged in a wondrous song and dance routine; the DCTV universe introduced viewers to this new age Music Meister (played by the incredibly talented Darren Criss of Glee fame, making for a very fun Glee-union). He is a new creature entirely with a different end goal. This Music Meister appears to not quite be a Meta, but more some sort of impish/alien/extra-dimensional being, closer in relation to Loki (Marvel, Norse, Supernatural take your pick they all fit here). He is similar to Mr. Mxyzpltk in the sense that they’re immensely powerful, but more mischievous than malicious.

While not explicitly stated, its implied that Meister’s power works through eye contact which sends the effected into a coma/dream like state, where they are thrust into a world of their subconscious creation. In this instance, our heroes obsession with musicals, notably Kara watching Wizard of Oz with the Danvers family as a child, and Barry watching Singing in the Rain with his mother and as an adult when he’s sad, (his break up with Iris comes into play in this episode), sends them both into their very own musical. While they’re in that state, it appears that Music Meister can drain their life force and/or powers. Kara’s solar radiation and Barry’s Speedforce are depleted, and Meister then begins using their combined powers as he runs around Central City. Music Meister also shows capable of phasing/teleporting through the containment cells in STAR Labs. It becomes unclear if he truly needed the breach device Cisco gave Supergirl, or if he simply did that to bring our heroes together.

At the close of the episode, Meister reveals that his actions are not intended to be malicious, but as a result of believing in heroes. He wants to help them accept that they need saving at times, and in this particular case, “It was to teach all of you a lesson because I see everything. And I saw two people with two broken hearts. Love was the lesson. Love is about letting yourself be saved.. it’s not just about saving other people – even if you are superheroes” It turns out that this Music Meister is just an old fashioned romantic.

He explains to Mon-El that the team couldn’t even begin to comprehend what he is or where he’s from, dodges their unanswered questions,  and leaves the Flash, Supergirl, and friends in well;  a flash, complete with a musical style fade out. 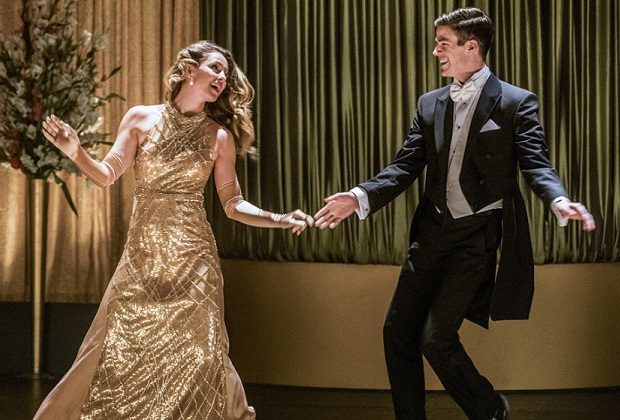 I’m going to begin with my problems with this episode. There aren’t many; but unfortunately the presence of them causes the episode to not rise to its full potential.  Duet could’ve been an end to end nearly perfect, award worthy, episode. But, it still manages to be an incredibly good episode. My single biggest concern with this crossover episode, was the same irk I had with the absolutely TREMENDOUS four episode crossover event when the DCTV “Justice League” battled the Dominators. That issue is the absence of  the character, villain, or situation in the leading episode, (Supergirl in both cases). Therefore, it doesn’t meet the requirements of a multiple episode crossover event. I would’ve much rather had the plot truly stretch across both shows.In fact, my second biggest issue was how fast this felt, trying to have the Duet musical world and the outside world occur simultaneously cut heavily into the time. I also believe a character as fun as Music Meister truly deserved two full episodes.

I wish this week’s Supergirl would’ve occurred as it did, ended the same way, and then this week’s Flash had its normal episode focused solely on them.The last two minutes could have been team Supergirl showing up, leading to the following week having a true two episode event. It would have given both Supergirl and the Flash some equal footing in the episode. There would have been opportunity for more contribution, both acting and singing, by the other cast members. For example, David Harewood, Chyler Leigh and Chris Woods all have a considerable amount of musical talent. My other grievance with the episode is a grain of salt because it’s also a good thing. The ‘lesson’ Meister teaches our heroes is to listen to their hearts, forgive, accept the ones they love, and to let themselves be saved. In turn, this just  seems to delete out the tension and drama between Kara/Mon-El and Barry/Iris. This is a low mark because with the snap of Music Meister’s fingers, (and a few songs),the issue is gone. It becomes prominent  that the conflict was manufactured just to have it undone. But, at the same accord its a win because there is one less episode we have to watch the rinse and repeat of the ‘I love you but I’m mad at you now’ and ‘I’m happy with you again but you’re mad at me’ moments. 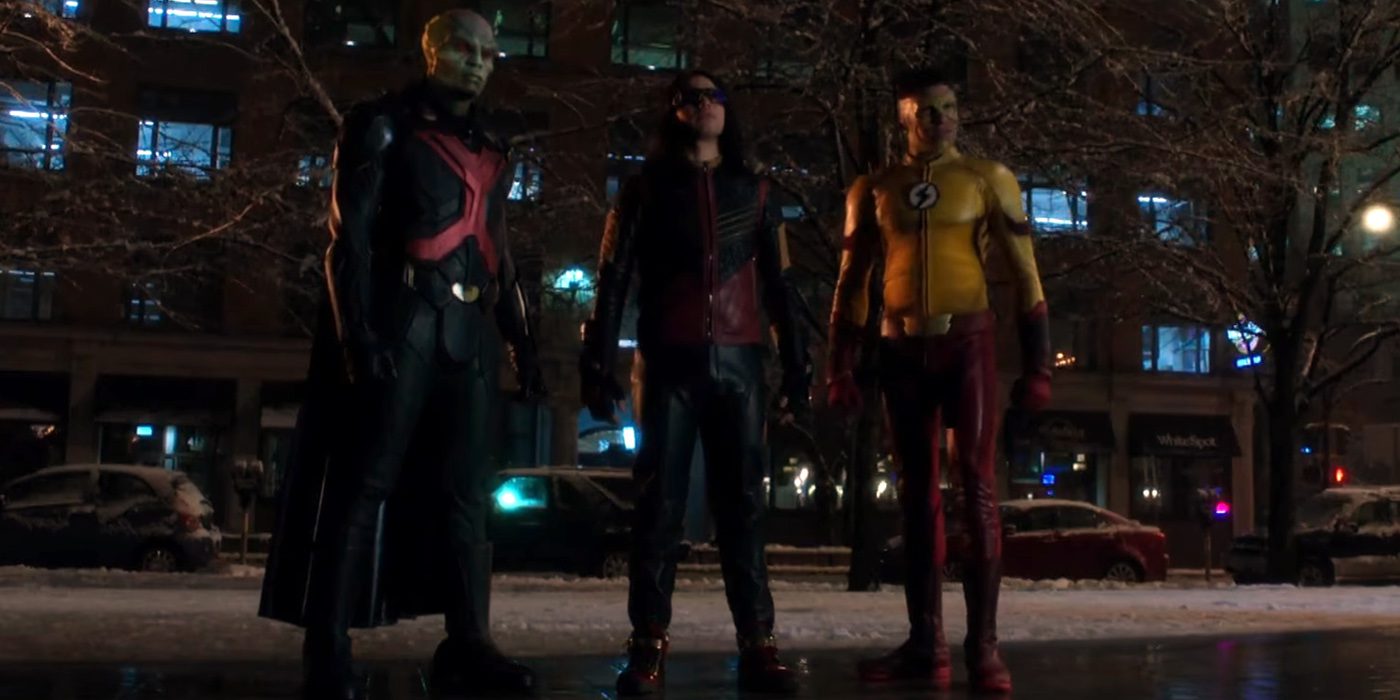 Alright, now onto the good stuff, every instance where we get to combine these DCTV casts in any fashion is great. They’ve proven time and time again, that their chemistry not only exists within their individual shows, but across the multiverse. It is just incredible. In my opinion, the worlds of  Flash and Supergirl merge the best. Maybe its because they’re both the slightly more campy/upbeat of the DCTV shows. While the musical part of the show was absolutely amazing, it was equally as fun seeing the merger of Team Flash and Team Supergirl. We got the chance to see them unite in order to fight to save our heroes, and battle the mischievous, although confusingly driven Music Meister. We finally had a chance to see Team Flash freak out a little bit when the Martian Manhunter revealed his true form. Meanwhile, Vibe, Kid Flash, and Manhunter all got to have an awesome team up battle to apprehend (until he decided to simply phase out of the containment chamber) Meister. It is always great seeing them share scenes together, all the more reason it would’ve been nice for it to have been a true two episode event.

The music, holy Gene Kelly the music; there could be an entire musical season and I would eager await each new episode, and probably watch them on repeat. Anyone who has ever even slightly smiled during a single musical was in for a treat with this episode. Grant Gustin, Melissa Benosit, Jeremy Jordan, Carlos Valdez, John Barrowman, Jesse L. Martin, Victor Garber, and our guest star  Darren Criss all have positively tremendous voices, and the songs they sing are simply wonderful. The combinations of all of these incredible voices give goosebumps throughout the hour. The backdrop of a mobster-esqe musical lends such a wonderful time period to draw songs and performances from. It provides the perfect context for the numbers.

With the powers the Meister uses on our heroes, teaching them a lesson, and the only way out being to follow the plot (no Kara, not the Yellow Brick Road); the setting is one that is truly believable as a period piece musical. Duet is the complete package with an amazing setting, perfect lighting, wonderful costumes, and music numbers Tony nominations are made of. Grant Gustin and Melissa Benosit dazzle with a little Gene Kelly style tap dancing. There is a fun dance number led by Darren  Criss, and songs heavily featuring John Barrowman, Carlos Valdez, and Jeremy Jordan. The beautiful combination of voices between Barrowman, Martin, and Garber, are rounded out by bookend performances starting with Benoist performing ‘Moon River’, and outside of our musical dream world, Gustin serenading Iris with ‘Runnin’ Home to You’. After the song, Barry followed up with a true, non future changing ulterior motived proposal which Iris tearfully accepted. There isn’t a shortage of amazing songs that not only showcase the impeccable talent of the cast, but act as wonderful plot driving devices as well. This episode turned out to be a true, and legitimately good, musical. 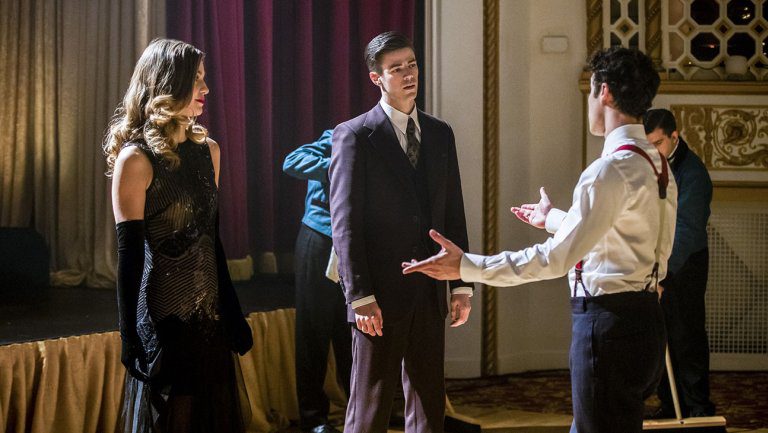 This episode had everything a good musical and good episode has, humor, chemistry, plot, emotion, danger, prevailing against the threat, a lesson learned, and some utterly Super music. I sincerely wish the multiple crossover episode events would take place during the entirety of the included shows. The only things this episode was lacking could’ve easily been remedied with just a little more air time. I know there will be folks who don’t enjoy the musical episode, and that’s okay. It isn’t for everyone. At the end of the day, it boils down to the fact that Duet is a musical episode because its thought out and makes sense for it to be one. It is a well written story, expands on incredible chemistry between the former Glee co-stars, and is a mix of serious, fun (mostly fun), and is a good time. Duet is just a beautifully executed episode. 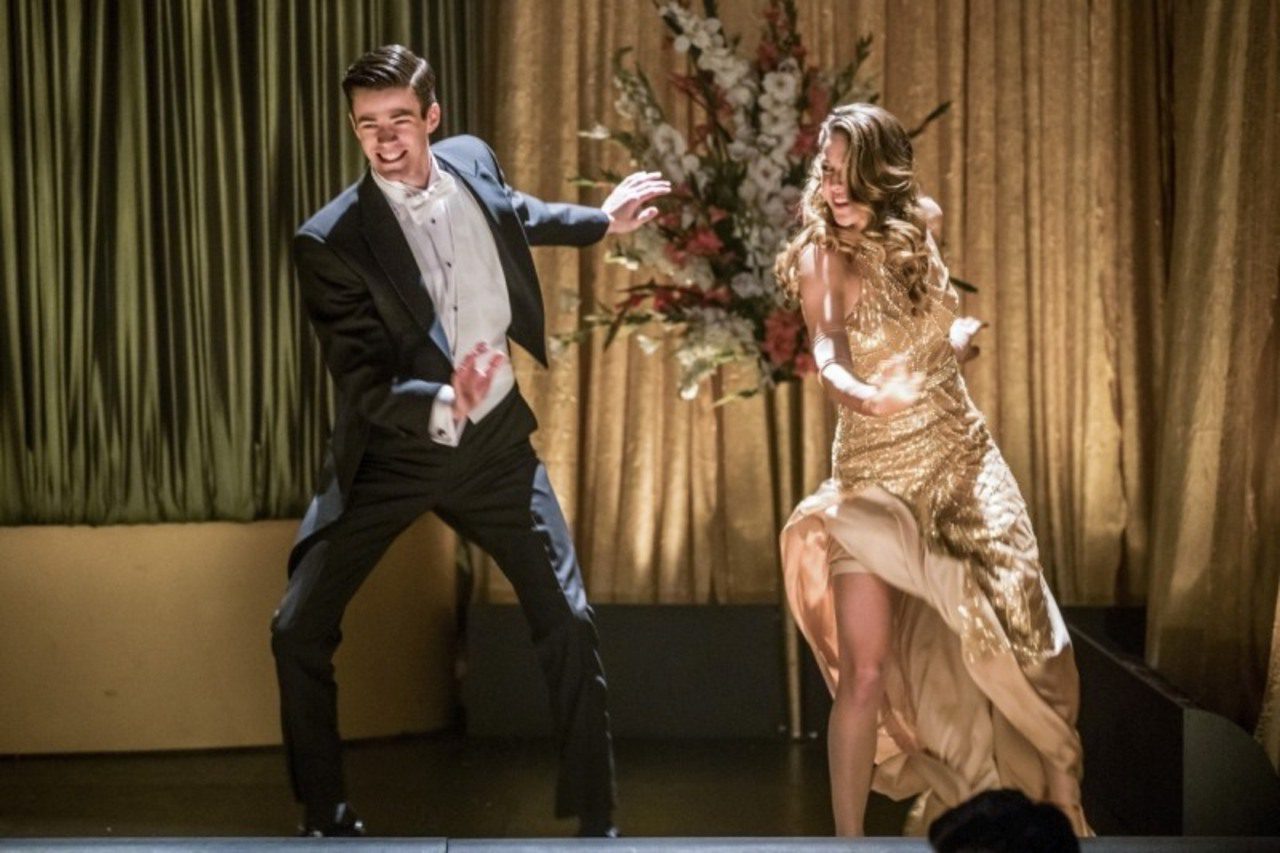 Did you love it? Did you hate it? Are you downloading the soundtrack? Let me know, and tune in next week as we move from musicals to magic!