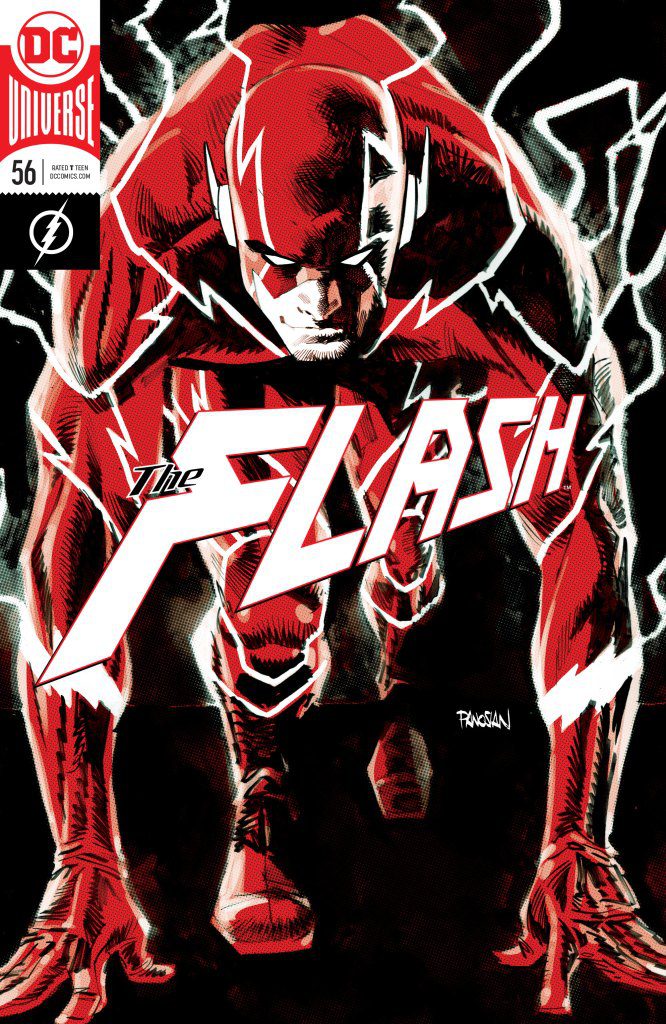 Alright, let me start off with a minor rant; this one is an oldie but goldie. Why do comic publishers still use the marketing trick of placing the work of one artist on the cover while the interior art is supplied by another artist? Does this really do justice to the person that does the bulk of the issue? That artist is talented enough to carry the comic for twenty plus pages but not captivating enough to handle the cover of the comic? This tactic leads to one of two conclusions:

Please, comic publishers! Please stop this bait and switch. If you want to showcase other talents with your characters provide an art gallery towards the back of the book, or place the non-interior artist on the back cover. Enough with this marketing madness!

The reason that this rant comes up during this issue of The Flash is that the two covers offered for this issue are provided by Howard Porter and Dan Panosian. Both are extremely accomplished artists in their own right and their covers are spectacular; Panosian’s cover of Flash in a runner at the starting line pose was really eye-catching and I instantly wanted more. Instead, I opened the book up to find Scott Kolin’s art looking back at me; there is nothing wrong with Kolin’s artwork, but his style is a far cry from the previously mentioned creators. Not a good way to start your reading experience.

Fortunately, I’m a fan of Kolin’s work on the scarlet speedster and remember his previous runs. Not much has changed in Kolin’s approach to Flash, if you have read any of his previous work then this is just more of the same. Its quality that we’ve all seen before, in fact, Flash is how Kolins got his first big mainstream exposure.

What really got me in this issue was the storyline. Joshua Williamson is adding a new twist to the citizens of Central City by adding new powers to old favorites. The city was the epicenter of new forces that were unleashed on the world, at least that’s how Barry Allen explains it to Det. Burns as they try to take on Heatwave; who now has the powers of a raging fire god. Fans have long been familiar with Flash’s speed force, but now Williamson has added new elements to the series in the emerging sage force and strong force. These are just two examples of the newly emerging power sets that are popping up across the city.

It’s these new takes on old characters that are breathing new life and freshness into a cast that had begun to turn stale. The added danger of Flash’s rogue gallery now being beefed up and on the loose returns a sense of danger to the series that has been missing.

What Williamson may have inadvertently created is a great starting point for new readers to jump onto this series as it forces the fans, new and old alike, to reexamine characters that have long been part of the series yet overlooked. Heatwave is a perfect example of breathing new life into a tired trope. He likes fire… a lot. But what if Mick Rory couldn’t control his fascination for flames and he had the power to turn the entire city into smoldering rubble? Now we have some depth. Now we have something worth reading! And that’s where Williamson had proven himself to be a great captain for this new journey.

Complaints about the art aside, this new twist on Flash has got my attention and I’m curious to see how this all plays out.