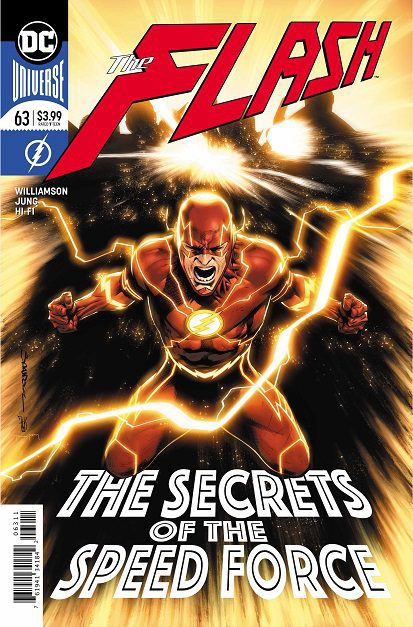 Barry Allen’s Force Quest comes to a dramatic conclusion in this issue.

After being betrayed by Psych and both men at the mercy of Gemini, it’s up to Iris to save them both with a desperate move that gives Barry just enough time to recover and enlist Psych to use their combined Force powers to end the threat of Gemini.

After defending themselves against the super-powered thieves, Psych takes things too far causing damage that he cannot take back. Barry confronts the man and when they link minds, Psych explain to him exactly what the nature of the Forces actually is. It’s news that Barry has a hard time accepting and when he runs back to Gorilla City for answers, he discovers that more secrets have been kept from him as well as the return of a dangerous threat.

Joshua Williamson ends this particular story on a high note by subverting expectations about the reader could expect from the Force Quest. Adding this new wrinkle to Barry’s life as the Flash gives the story an immediacy that is in line with the concept of speed and movement. The Flash won’t have time to remain still and he’s going to have to fight to keep he has. It’s an interesting position to put the character in and it works.

The art by Minkyu Jung is good. There are a couple of good panels in the book, but nothing that really stands out. It’s unfortunate because Williamson writes a couple of really good moments that could have been punctuated by dynamic visuals.