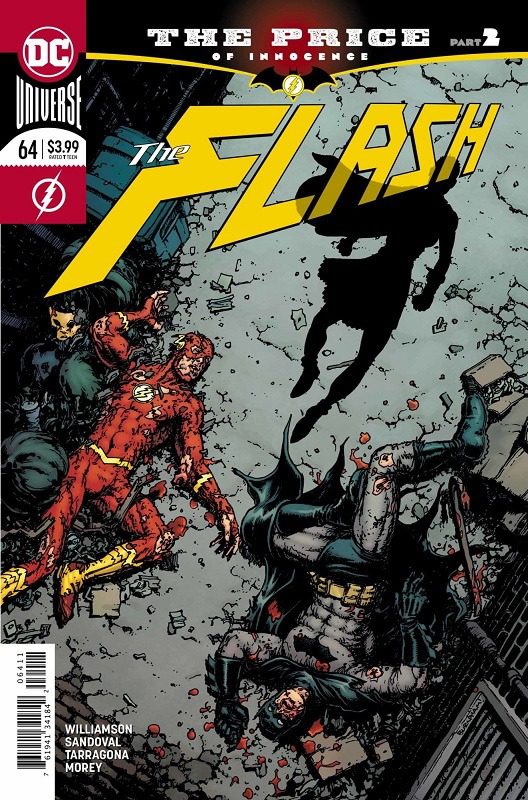 Batman and Flash’s investigation into Gotham Girl’s attack might have a connection to the Sanctuary massacre.

Whoever has been keeping Gotham alive is sending Claire out to get revenge on Flash and Batman. At the Flash Museum crime scene, the heroes discover clues to a location Gotham Girl may have come from. As the fallout of the Sanctuary investigation continues, Barry must deal with the fact that he isn’t there to tell Wallace what happened and Iris is furious at Batman.

When the pair discovers a base on a secret island, their admiration for each other’s detective skills comes to an abrupt end when they discover clones of Gotham, a possible link to Sanctuary and an attack from Gotham Girl that leaves vulnerable her next target.

There is a lot in this issue to like. From the mutual admiration, both heroes have for each other’s skills to the shared frustration they have in not being able to solve this particular mystery, Williamson does an amazing job of giving readers a reason to pair these two heroes together. I was hesitant to fully buy into this plot with Gotham Girl going after Flash, but the possible connection to Sanctuary and the wedge that drives between Batman and Flash have got me interested and invested in where this story goes next.

Rafa Sandoval’s art punctuates this action-packed and fast-paced story. The art looks amazing and complements the tone and pace of this story perfectly.