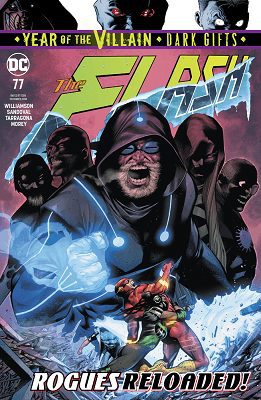 Barry has gathered everyone at his new Speed Lab in order to make amends with the young speedsters and help them discover what is affecting the speed force. When the Black Flash attempts to kill Steadfast, Barry and the others spring into action to protect the wielder of the Still Force. They manage to spirit him away, but the Black Flash is not done hunting and his target are the other two force wielders, both of whom do not like Barry at all.

At the same time, Cold and Heatwave continue their mission to rebuild the Rogues and their first stop will be to the Weather Wizard.

I like the story that Joshua Williamson is telling in this issue. Barry’s journey to learn about the new forces and how they affect him is a great premise and his alternate motive of mending fences with the people around him is handled perfectly. My only misgiving is my hope that this story doesn’t degenerate into another “Barry speeds into another situation without thinking and has to clean up another mess he created while someone else pays for it” story. I’m confident Williamson has a plan to evolve the character, especially in light of what he’s facing both personally and as the Flash.

Rafa Sandoval always brings quality work to the art and this issue is no exception. The depiction of Flash in motion is always dynamic and adding other speedsters only enhances the beauty of the visuals.