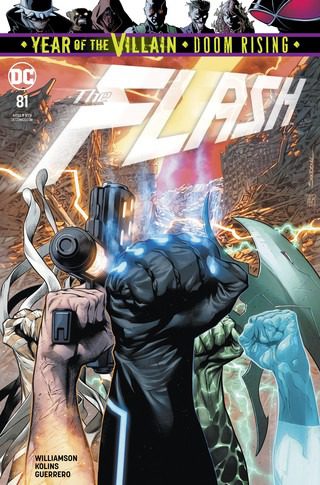 A Flash will have to make the ultimate sacrifice to repair the Speed Force, but it might be too late for everyone.

Flash is hurt after being attacked by the Black Flash and Zolomon is trying to kill the personification of death in the Speed Force itself. Barry will have to find a way to convince his rival that there is another way to stop death and that way will require repair of the force barrier that Zolomon destroyed. In order to repair the damage, one of the Flash’s will have to make the ultimate sacrifice and part of the decision will be based on their shared history with Eobard Thawne.

At the same time, Avery and Wallace are hiding in Iron Heights trying to discover what the Rogues are looking for. As they agonize over what their next move will be, Glider surprises them and the resulting melee will send the injured teens back where they came from as the Rogues and the rise of Doom continue.

I like the callbacks in this issue to the different Flash storylines. I think Williamson does a brilliant job of drawing in all the plot points and character moments into a story that is compelling and interesting. What I really enjoyed was the fact that Barry wasn’t blaming himself for everything and looking for ways to be a hero. His moments were understated and that made them work for me. I especially enjoyed the end of the issue and how it connects to the Justice/Doom War storyline. Can’t wait to see what’s next.

Scott Kolins offers some great visual moments in this issue. Everything in the Speed Force looks fantastic.

flash The Flash
Are you an Insider?News, reviews, & updates are just the beginning.