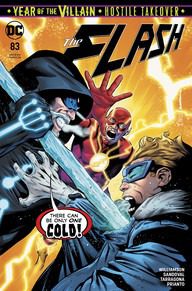 Captain Cold continues his reign of Central City with both the power he wields from Lex Luthor and the story that he’s killed the Flash.

Unfortunately, someone close to him will betray him and free the scarlet speedster.

Glider decides that, with the end of the world approaching, she needs to stop her brother and to do that she will need to free the Flash. After a narrow escape and with her brother’s minions on the hunt, Glider and Flash will have to find the other speedsters if they are going to mount a defense. Unfortunately, Barry’s attempt to use the Speed Force will cause more harm than good.

I found myself more impressed with this issue than the previous one, but the premise still bothers me. Even with Flash on the run and Glider helping him, there are still too many similarities to previous arcs to be ignored. Plot and pacing wise, this story is fine. Williamson is doing a fine job of piecing the story together for the reader with new revelations coming as the story develops. There are things to enjoy about this issue, but the arc is still lacking in either innovation or complexity. The only really interesting thing about this issue is what happens when the Flash attempts to use the Speed Force and you have to get through a pretty generic story to get to it.

The saving grace of the issue is Rafa Sandoval’s brilliantly detailed and stunning visuals. The art is dramatic and tense with a visual flair that ramps up both. I love the look of this issue and how gorgeous he makes the characters look as the action leaps off the page.

DC comics The Flash
Are you an Insider?News, reviews, & updates are just the beginning.