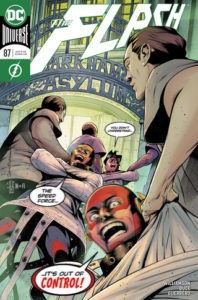 In the aftermath of the epic battle to save Central City, Flash, and Cold and being transported to Arkham Asylum and Iris looks for a solution to Barry’s Speed Force issues.

Both Barry and Snart have been captured and are being transported to Arkham Asylum. At the same time, the Rogues have been rounded up and Iris manages to get Avery and Wallace out of harm’s way so they don’t share Barry’s fate. As the two opposing forces stare each other down, they do something unexpected; they talk.

Both Barry and Snart trade insults and barbs, but there is an understanding brewing between the two men about who they are and why they are what they are. Iris takes Wallace and Avery to Meena and they discover that there is one person who might hold the key to helping Barry and the others control their connection to the Speed Force; another one of Flash’s Rogues Gallery. As the experiment to save the speedsters begins, Captain Cold gets some not so unexpected help breaking out and Barry will have to choose between going after the villain and saving his friends.

Joshua Williams brings the story to a satisfactory conclusion and not only leaves the door open for more confrontations between Flash and Cold but ends the issue with a cliffhanger involving a new villain with a connection to Barry’s future. The possibilities of what’s to come are interesting and this story is filled with character moments that reflect the complex and complicated relationship Flash has with his Rogues.

Christian Duce delivers some stunning art in this issue. Even in the moments between Flash and Cold, Duce’s art showcases the strength and tension between the two of them. Even chained across from each other, both characters seem to constantly look like they’re flexing.