The Gifted star Emma Dumont has officially been cast as the titular role in the upcoming live-action film based on the comic book series Razor.

The comic creator Everette Hartsoe, the film’s director Rob Cohen, and Dumont herself have all taken to their various social media platforms announcing the casting. Dumont, who plays Lorna Dane aka Polaris and is returning for Season 2 on Fox’s The Gifted, was very excited to announce her new project to her fans and has been trading social media post comments back and forth with Hartsoe and Cohen. The creative team behind the film seem equally excited with Dumont’s casting with Cohen telling sources:

“Emma is a renaissance woman, she’s a wonderful actress, a professional ballet dancer, and is currently getting her degree in Robotics Engineering. I have her training in Krav Maga and, believe me, there is nothing she can’t do.”

Producer Jeff Most added, “Emma was born to play Razor. She is the embodiment of Everette Hartsoe’s comic character come to life. Emma naturally exudes the inner strength, acumen, athleticism, vulnerability, likability and street-wise intelligence that are the hallmarks of Razor. I couldn’t be more excited about finding the right actress in Emma to bring the character of Razor to life.” 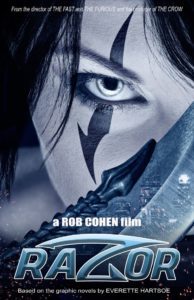 Emma’s physical appearance being likened to Hartsoe’s character art is one more added bonus to the casting. Razor or Nicole Mitchell is a gritty, vengeful vigilante, earning her hero name due to the wrist gauntlets she wears with razor blades extending from them. At 10, Mitchell witnesses the murder of her police officer father by a group of criminals hoping to cover the tracks of their illicit activity. Witnessing her father’s murder results in Nicole Mitchell being committed to a sanitarium for a decade, the time she passes by crafting their plans for revenge upon the criminals who took her father from her.

The character of Razor is an incredible read, taking everyone’s favorite aspects of The Punisher, Hit Girl, and X-23 rolling them together with some essence of The Crow to deliver a roller coaster of excitement and badassery that Dumont is going to do a phenomenal job embodying on the big screen. With the intensity and attitude Dumont exhibits for Polaris, bringing thousands of layers of personality to the surface in a single scene, I cannot wait to see what she has in store for Razor. With a star talent like Dumont personifying the title role, the bar is set extremely high for the other characters she will share the screen with. I am extremely excited to see what we learn next about this new vein of comic film and to see Dumont suit up as Razor!