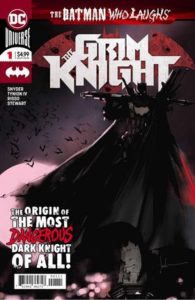 Through everything, Batman has avoided taking that fateful step. The one he claims he can’t come back from. Always leaving readers wondering, “What if Batman decided to kill?” That question is answered in The Grim Knight #1.

A world without Joker, Bane and the other supervillains, only crime bosses who Batman can dispose of quickly. The way it all starts is pretty heavy, with Bruce Wayne killing his parent’s mugger the night of their deaths.

It all leads to a training sequence similar to Jason Todd’s when he first came back from the dead to become Red Hood. Actually, these two would get along pretty well. Although, The Grim Knight’s methods with Alfred may have been a step too far, even for Jason.

The Grim Knight’s methods in his world were effective, as gruesome as they could be. Even Harvey Dent stayed clean — or at least got back on the right path thanks to The Grim Knight. Furthermore, Gothamites were appreciative of their Batman’s approach. He kept them safe and didn’t let things escalate. In fact, the people of Gotham in The Grim Knight’s reality would probably hate the traditional Batman in comparison.

Still, this story illustrates exactly why Batman refuses to use guns and the like. He’s a man of extremes. The “middle ground” is not part of his vocabulary. No one was safe from The Grim Knight. Regardless of the crime, the punishment remained the same: death.

The way Scott Snyder and James Tynion lay out the origin, it doesn’t appear The Grim Knight could have his own series. It’d be worth a shot. The character almost makes The Punisher seem soft. But because he’s made it so hard for villains to exist in Gotham, a full-fledged story, or even a mini-series, would likely just entail The Grim Knight mowing his adversaries.

Actually…maybe a mini-series would be a good idea.