THE GUARDIANS OF THE GALAXY #2 (REVIEW)

The Guardians of the Galaxy #2 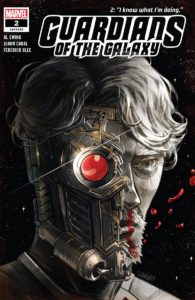 Al Ewing is now off to an explosive start with Guardians. Issue #1 started slowly with a new threat of reborn Greek gods and a Guardians team reluctant to answer the call for help. Peter Quill and Rocket left the core team to join up with Nova, Moondragon, Phyla-Vell, and Marvel Boy. This band of galactic defenders made up the new roster, but by the end of issue #2, that roster is in question.

Al Ewing, who brought demonic horror to The Immortal Hulk series, now brings a new creative direction to The Guardians. While the first issue was an introductory chapter, issue #2 is filled with tense action. Ewing wastes no time in this tightly scripted issue as the action and plot are dense with battles on multiple fronts. Ewing’s introduction of Greek gods provides a familiar context, but he keeps the gods’ motivation secret. The Greek mythology setting pairs with a classic Greek tragedy and brings potential victory at a great cost.

Ewing’s battle between Greek gods and galaxy defending superheroes is a fitting parallel. Comic book superheroes are 20th Century mythology. The myths of superheroes contain both ethical and inspiring tales for a modern age. The pairing of these super-beings sets the tone and scope for Ewing’s run and by the end of the issue, Ewing leaves readers wondering if this confrontation is resolved or just beginning. 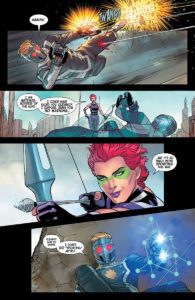 Juan Cabal’s beautiful artwork matches the epic tone of Ewing’s plot. The panel layout and overlay of action creates a kinetic energy and a frantic pace to this battle of gods. The psychic connection between Moondragon and Phyla-Vell is fittingly portrayed through overlays, interlocking imagery, and even a quiet moment deep within their shared mind. Frederico Blee’s colors are a work of art providing both an otherworldly feel and cosmic scope. The color pallets are unique to each battle setting and create a sense of place that contains the reader within each confrontation.

The combined narrative and artistic efforts create an issue necessary for reading twice to unpack the plot and unravel the imagery. Wherever this creative team takes these galactic heroes next will be worthy of their modern mythology status.

Al Ewing Guardians of the Galaxy Juan Cabal
Add your voice!Join the conversation on Discord...
Join Our Discord