Stan Lee was the Man, the Myth and the Legend as said by Kevin Smith. He co-created the modern Marvel Universe and gave many of us the characters that we hold dear to our hearts. On November 12, 2018, Stan Lee passed away. He left behind a legacy that has affected a community that grew up on his creations and shaped who we are today.

I had a few interactions with Stan Lee. My first was at San Diego Comic-Con in 2006, where he was part of the Marvel Ultimate Alliance panel. He was in awe of how the universe he created was going to be a massive video game. Characters he created were going to work together to save the Universe. At Megacon Orlando 2015, I was in line to get my She-Hulk comic signed by him and this older man in a yellow sweater walked by and cut in front of me. It took me a moment to realize it was Stan Lee.

These were the small personal interactions I had with him. In the media, I first became aware of the greatness of Stan Lee when I watched Mallrats. His cameo started my admiration for him. As the years and cameos went along it only grew from there. Many of us went to a Marvel movie just for his cameo alone. 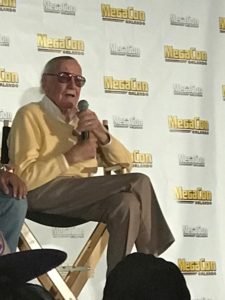 Here at the GWW, Stan means something different to each of us.

Kristal Yeager
Maybe an odd one but I learned to read with Captain America comic. Then onto others. His characters are more than just entertainment. He was my grandfather’s favorite character so instead of just looking at the pictures, I wanted to learn what they were saying too so they wouldn’t have to be read to me. I could take them in my room. There were only two of us in the whole kindergarten of that school that could read and I was one of them. Lol. He created a character so intriguing it got a 4-year-old to insist on learning how to read and stick with it I’ve also met him. Such a cool guy. Didn’t just shove you along like some of them. He was so surprised that my 18-month-old waited in a three-hour line without freaking out in her cheap captain America mask. He mostly talked to her. He means a lot.

Nick Friar
I’m sure Stan knew he affected the lives of many, but I wonder if he truly knew how much of an impact he had. Can’t imagine anyone human could process that. Because he didn’t just create and develop amazing characters. He brought comics to a new height and forced everyone else to up their game, too. And as we all know, he’s had the same impact on the rest of the entertainment business. I doubt we’ll ever see another individual leave such a powerful impression on so many and have it only result in positivity.

Joe Barhoum
It’s hard to attribute so much to one person. Marvel and its characters will always be associated with Mr. Lee. His charisma and creativity will always be part of our culture and history. Personally, I will always remember Mr. Lee for his narration in the Spider-Man game on PS1 back in 2000. For some reason, I always think of that game when I think of Mr. Lee. So long, Mr. Stan Lee!

Casey Walsh
Stan Lee changed my life and opened my mind to a world of heroes and villains that I so absolutely love. I got to meet him a couple of times at cons, nothing extensive but seeing the legend in the flesh was akin to a religious experience. He was a great mand and a great mind and someone who will dearly be missed by every soul he has touched in his long, successful career. Stan, you truly are the Man and we will miss you.

As a community, the passing of Stan Lee hit all of us hard in different ways. He was one of the few creators whose work spanned decades. The GWW always held him in high regards for all the work he did to make comics and the characters he created part of our daily lives. We will miss you, Stan. Excelsior!