“Age can wither me, Noodles. We’re both getting old. All that we have left now are our memories.”
–Once Upon a Time in America

There are 209 minutes in Martin Scorsese’s The Irishman, and I couldn’t cut a second of it. 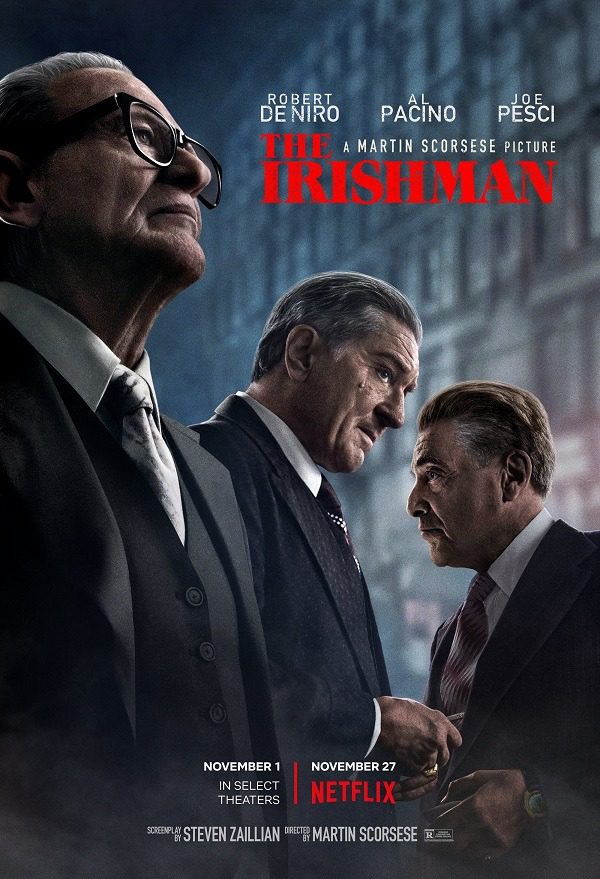 This is a monumental achievement in filmmaking, one which sees four titans (Martin Scorsese, Robert De Niro, Al Pacino, and Joe Pesci) collaborate on an event that will never be repeated. A film which possibly covers more ground than one review can summarize. The Irishman is a gangster picture, yes, but it is also so much more. It’s a narrative poem about America, about manhood, aging, and how the relationships we build through the years can be torn apart over decades or in an instant.

When we first see De Niro’s Frank Sheeran, he’s an eighty-something-year-old man living out his final days in a nursing home. Then, like many old folks, he begins to tell his life’s story. Only, when we listen to this particular old timer’s tale, we see that this was a man who took part in events that shook the world, even including presidential elections. He’s a veritable Forrest Gump with a handgun. Is he telling the truth? We don’t know. But Scorsese is smart enough not to let the facts get in the way of a good story.

Have you seen this:
Seven Secrets #11 (REVIEW)

And what a story Sheeran tells! While this is the least glamorous depiction Scorsese has made of the Mafia (unlike fellow Irishman Henry Hill, Sheeran isn’t wowed by any movie star allure from the Mafia. He’s just looking to put food on the table for his family.), the power of organized crime is a palpable force in this film. The way Joe Pesci’s Russell Buffalino wields power could not be any less like Tommy DeVito or Nicky Santoro. Rather than bellowing with insecurity, he wields power the same way he speaks: with quiet confidence. And when we see the world events he and his Mafia colleagues are connected with, we believe them. Most importantly, we believe the relationship he and Sheeran share with Jimmy Hoffa (Al Pacino).

Hoffa is a man who is nowadays shrouded in myth, and Scorsese could not have chosen a better actor, in both stature and skill, to play Hoffa than Pacino, who’s in his first Scorsese film. A man who is by opposing turns bombastic and soft-spoken, the friendship built between Sheeran and Hoffa feels like a brotherhood. It’s been a common thread in Martin Scorsese films to follow relationships that are forged then torn apart by organized crime, and the bond between Hoffa and Sheeran is his most beautiful and tragic yet.

But, in spite of all this power, bombast, and tragedy, we know how this story ends. The Irishman is not a depressing movie by any stretch of the imagination, indeed, it’s often very funny, but it is a melancholic one. A running gag in the film provides examples of both moods: often, when a character is introduced, there is a caption beneath them describing his name, when he died, and how he died. And with Sheeran, it’s right as the film begins that we know where his story ends: in a retirement home. And through the sad, beautiful eyes of Robert De Niro, we also see a legendary filmmaker wrangling with both his legacy and with the future. And this is best seen in how Scorsese uses his camera. Unlike the frenzied, cocaine-fueled energy of The Wolf of Wall Street or Casino, Scorsese often prefers to let the camera rest, to let the mood of the scene be filled by his actors or the music. And every scene feels like it has a lump in its throat. Scorsese is not taking us along on a manic joy ride, but rather a slow moving tour of a life that has long since disappeared.

The Irishman is a profound cinematic experience. And a requiem for a genre conducted by one of its maestros.