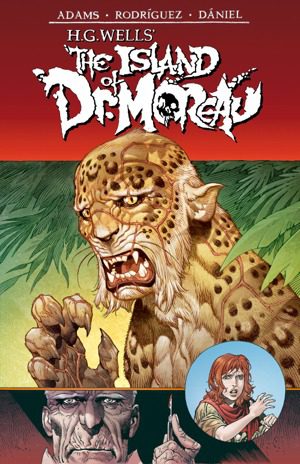 A lone survivor of a shipwreck finds herself drifting at sea until her craft makes its way to land and she is rescued by a mysterious man and even more mysterious island dwellers.

When Ellie Prendick awakens, she finds herself being cared for and that’s when the mysteries of the island begin to unfold. She finds a bizarre array of human/animal hybrids living in communities across the island. Hybrids that can speak English and are the results of the experiments of the mysterious and disgraced Dr. Moreau.

As Ellie explores the island and discovers the creatures inhabiting it, she finds herself on the run from the Doctor and his forces.

Other than the change in the main character’s gender, there doesn’t seem to be any real difference between this interpretation of the HG Wells classic and the original. That’s actually the only real issue I have with the issue. It’s presented and paced almost exactly the way the original story is, but there doesn’t seem to be anything new or innovative to hold onto and compel the reader to continue.

There are moments I enjoyed, but they were all visual. Other than the beautiful and impressive visuals provided by Gabriel Rodriguez, there is not much else to this interpretation to sustain the reader’s interest.