The Man of Steel #1 Review 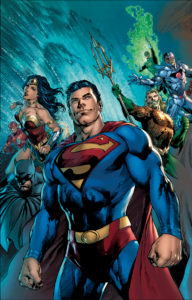 The Man of Steel #1
DC Comics

Back when Krypton was still alive and well, a warrior named Rogol Zaar looks warns that the planet’s inhabitants are a virus that must be wiped out. Currently, on earth, Superman is attempting to solve the crime of what appears to be a serial arsonist.

Brian Michael Bendis had finally started his much-anticipated run on Superman. With a new powerful villain that has an ax to grind with Kryptonians, a new supporting cast, and two big mysteries to solve, this first issue was jam-packed with story despite being a normal sized issue.

There is something about the way the first few pages start that felt very Marvel, which isn’t a bad thing. Superman needed a shot in the arm and Bendis definitely brings a fresh new energy. Ivan Reis has drawn the man of steel before in his big Justice League run with Geoff Johns. He brings a style that has a nice mix of classic and new. The red trunks were completely unnoticeable. It was always weird seeing people argue for or against the underwear. Unless you’re specifically looking out for the super crotch, his trunks won’t affect your enjoyment of the story at all.

I do worry about the fate of Lois and Jonathan. I don’t think they’re dying anytime soon but this run may shift Clark’s priorities away from his family, and that would be a major mistake. But so far we don’t even have a hint of what’s to come for the Kents. The addition of potential love interests doesn’t fill me with ease.

I wasn’t sure what to expect from Bendis but I found his dialogue for Superman very charming. It’s far too early to judge how the run is going, but it is off to a successful start. This was a very interesting first issue.

Brian Michael Bendis gets off to a strong start with The Man of Steel. It was a lot off fun.

Brian Michael Bendis Ivan Reis Superman The Man of Steel
Add your voice!Join the conversation on Discord...
Join Our Discord