The Man With A Gun an Arrow 5X15 REVIEW

Season 5 Episode 13 “Spectre of the Gun”

This is my very first written review of an episode of a TV Show (I usually cover movie reviews) and Episode 13 of the 5th Season of Arrow entitled ‘Spectre Of The Gun’ didn’t make for an easy review. The episode was uncharted territory for a superhero show in that it tackled a difficult issue for most Americans: gun violence / gun control. (Done on TV before, but never really on a superhero related show. More on that later). In the beginning of the episode, an unknown shooter carries a bag full of guns into City Hall and starts shooting people. We find out later that the killer is a citizen of Star City who lost his wife and daughters to gun violence and blames the previous city administration for not enacting a gun registry. Throughout the episode we see some fantastic performances from Echo Kellum and Rick Gonzalez as the two debate both sides of this contentious topic. 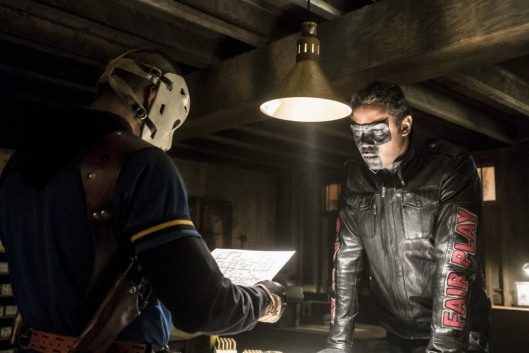 Paul Blackthorne also turns in a knockout performance as we see him struggle with this issue in his own way from a former policeman’s perspective. (But then again, when doesn’t Paul Blackthorne turn in a knockout performance). Felicity stays neutral on the topic even saying that the arguing between Wild Dog and Mr. Terrific won’t do anything to change the other’s mind. What I loved most about this episode was that the flashback sequences we’ve come to know as a staple of Arrow since the beginning focused not on Oliver Queen, but squarely on Rick Gonzalez’s character of Rene Ramirez (aka: Wild Dog). We get to see a rare glimpse into his past with his wife and daughter that gives us some fantastic insight into to this otherwise glossed-over character while also providing a level of depth for his feelings on this particular weighty issue that seems to consume America. 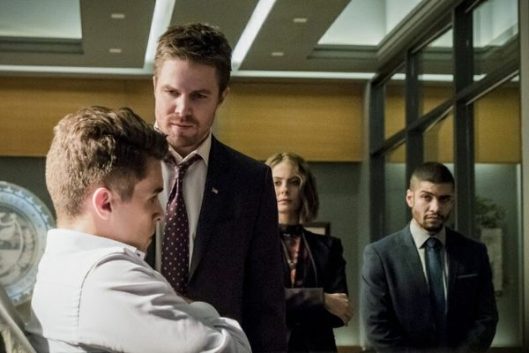 Obviously it’s not new for TV Shows to bring attention to this topic of gun violence. Buffy The Vampire Slayer did it brilliantly with their 3rd season episode ‘Earshot’ and Glee dealt with the topic in their 4th season episode ‘Shooting Star’. Even My So-Called Life aired an episode (‘Guns and Gossip’) centered around gun violence in their 1st season. The difference is that these other shows I’ve just mentioned don’t normally see guns being used in every other episode if they ever appear at all. For that reason, this episode of Arrow seemed very out-of-place and odd. Having Oliver wring his hands over someone using a gun to commit multiple murders can be likened to watching Walter White having anxiety over someone dying from a drug overdose.

While the episode was well-nuanced in the sense that we saw both sides of the debate being waged (mostly thanks to the interaction between Rene and Curtis), it did still seem a bit forced when we are watching a show where the entire 2nd season featured a villain named Deathstroke, where we have a group called “The League Of Assassins” and when a character from the current season is a heroic vigilante named Wild Dog who uses automatic weapons on a regular basis as his preferred means of combat ever since his first appearance on the show. The resolution of the story featuring Oliver Queen and NOT Green Arrow as the person who put an end to the killing spree was a nice touch, but I still felt like I just saw a one-shot special and not an episode that fit within the continuity of this particular series. which has a history of being gritty and violent. No matter which side of the debate on which you fall, the take away from this episode for me was Echo Kellum’s speech as Curtis when he muses about how we, as a country, used to be able to engage in healthy debate and still respect each other when our opinions differed. Now, not so much.