The Next Part of the Story: “Justice League vs Suicide Squad” #5 (Review) 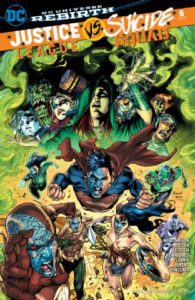 Maxwell Lord’s plan has finally come to fruition. With the aid of the Heart of Darkness and the powers of Eclipso, Max has enslaved the Justice League and is using their combined powers to “save the world”. What sounds like an amazing series of events are hampered by the exposition of Max himself as a possessed Superman takes him to the Oval Office. Instead of allowing us to experience these moments, we are given a one-panel aftermath image. Adding to the frustration is that all of this is happening while Batman is trapped in a basement with Amanda Waller and Deadshot. A basement.

Deadshot, who is normally portrayed as capable in the Suicide Squads solo stories, is depicted as a whiner in this issue. There seems to be no reason for him to speak other than to complain about the circumstances that they find themselves in. After they escape, Batman must 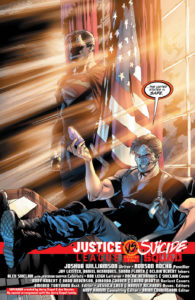 get the rest of the Suicide Squad and a resurrected Lobo together to devise some way of taking down the League and Maxwell Lord, and possibly saving Amanda Waller.

This issue is effective in moving the story forward, but there are threads that need to be completed and this just feels like the next part of the story. Going into the final issue, I find myself still interested in the conclusion, but not as optimistic about how it’s going to get there. Joshua Williamson has written a story in this issue that might have its reach exceeding its grasp. I am hopeful that it can be resolved in a way that affirms my faith in this storyline, but there is a lot that has been unpacked in these previous issues and they are deserving of a satisfactory resolution.

Robson Rocha’s artwork is really good. It is rich in detail and power and his splash pages are in harmony with the pacing of the plot. This was a satisfactory continuation of the plot, but there is a lot that needs to go into the conclusion in order to make it work overall.

Justice League vs. Suicide Squad #5 This issue just seemed like a continuation of the plot. It didn’t really give one the sense that this story is coming to a satisfactory conclusion.