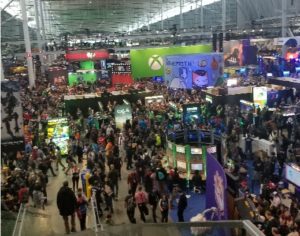 Another year, another PAX East gaming expo down in Boston. For those who don’t know what PAX is, it’s one of the largest gaming events each year and has been growing and expanding since its conception way back in 2004 (which really is a long time ago if you think about it) now with 6 events around the US and in Australia. The expo was to be a showcase exclusively for gaming since other pop/nerd culture arts had their Comic Cons, Anime Cons and so on. The PA of PAX is for Penny Arcade, the online comic and news source that is a site for gamers by gamers, and like their expo, they too have grown and expanded over the years as well.

So each PAX (West, South, East, Aus & Dev) brings in gaming developers from all different shapes and sizes. From the big names like Blizzard and Bethesda who try and outdo each other,  to the small indie games that are on display at the Indie Megabooth, its a place where the community of gamers and developers alike have banded together to thrive. The show pamphlets, a book really, is jam packed with maps and listings for hundreds of developers from mobile platforms, to consoles and PC. There are booths for gaming accessories including a set of $300 gaming headphones that were as amazing as the price. There are even booths to buy old video games or even purchase a sealed copy of Ocarina of Time for yourself. And the booths aren’t just reserved for developers but even colleges and tech schools have spaces to recruit you into their fold and become a designer yourself! 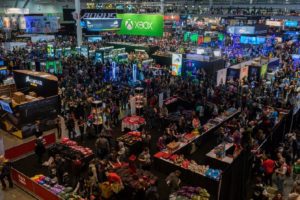 My experience at PAX East last year was something akin to walking around a theme park like Six Flags. Complete with the over packed alleys and main avenues to the hour plus long waist in lines just to try something out for 5 minutes. Not to say the volunteers and Enforcers who help run the show were doing a bad job, it just felt over congested. This year, however, I felt much more relaxed and comfortable walking around. It’s like PAX went from small time theme park to Disney. There was much more room to walk around, the hordes of gamers didn’t seem as jam packed akin to an episode of the Walking Dead. The lines for the heavy hitters like Blizzard’s line just for merchandise or Nintendo’s Switch still had the same expected longer wait time, but overall were much smoother and I was able to hit more games and booths in my time there. Last years “theme” seemed geared towards the E-Sport League experience, where as this year seemed more focused on Twitch and the live streaming aspect of the gaming community.

This event isn’t just for video games either. There is a very large section saved just for tabletop games. This is truly my favorite part of PAX, and a lot of other PAX-goers as well, enough so that PAX now has an Unplugged event planned for Pennsylvania in November that will be just for tabletop games. The tabletop arena had booths for buying harder to find games, increasing your dice stable, purchasing miniatures and paints or even trying out some of the hottest Kickstarter games like Dragoon which met its Kickstarter goal in the first 2 hours of the show! The tabletop arena really resonates with me, because it allows you to learn a game or hear about a game most of the time directly from it’s creator or art director. The passion for their game can clearly be seen after 3 days of non-stop gaming expo as they still have the enthusiastic greeting or from the excitement as they explain the rules to their game for the 1000th time.

With countless rooms and theaters spread over two floors of this massive exhibition center, there is plenty of space to roam and get away from the intense crowded main floor of the event itself. With panels and shows ranging from; a direct Q&A with the Penny Arcade guys on Friday morning, to the diversity in gaming on Saturday afternoon, and even the final event on Friday night with the final round of Omegathon (a contest pitting gamers against each other across various games to crown a champion).

To be honest, the most humbling and grounded booth you can stumble across or purposefully seek out though, was the booth for Child’s Play. The booth was a little pushed back from the main floor, but their iconic banner of a gaming control with a plus symbol on it backed by a field of light chartreuse green was easy enough to spot. Child’s Play, a foundation that “Seeks to improve the lives of children in hospitals and domestic violence shelters through the generosity and kindness of the video game industry and the power of play” was founded by Penny Arcade (Mike Krahulik and Jerry Holkins) as a response to the media’s negative portrayal of gamers back in 2003. The gaming community was challenged by Mike and Jerry to donate over the holiday season in response to the media’s portrayal and the community accepted the challenge with overwhelming results. It’s really 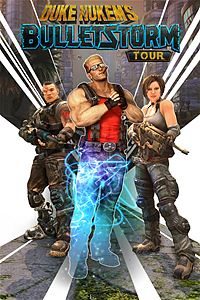 amazing to go to a convention or exhibition of any scale (and PAX is tilting the scale towards the massive side) and see the support a community can provide amidst all the rushing to get in line to try out the newest VR set or expansion onto a game.

As thrilling as it was to play and receive a free shirt for the newest HD port of Bulletstorm (with Duke Nukem!)and the serious nature of the scoreboard chase with first place prize money up for grabs, the most impactful moment of PAX East for me was talking with the staffers at the Child’s Play booth and buying a shirt for the foundation. As long as PAX East keeps improving upon itself and continues to stay grounded as they are, I know I will keep going back.