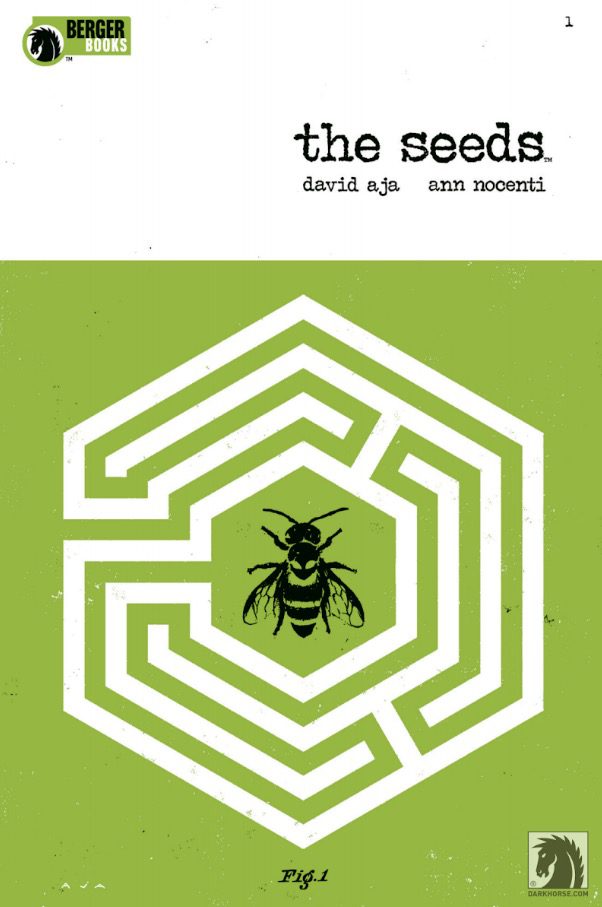 Ann Nocenti and David’s Aja bring a dark and grimy world in The Seeds, the new 4 issue run from Dark Horse comics. The world imagined is a pre-apocalyptic cyberpunk setting following journalist Astra as she fights with her own ideas of bringing the truth to the public. A wall divides the people into two zones, those with technology and those with without. What’s on the other side poses a mystery to the reader and Astras employer is wanting a story to publish to keep the people merely satisfied with fake news. What Astra really wants is a story to shock and liberate. And she may have found just that in issue one.

This had my attention from the first page with the surreal narrative and neo-tone art. The main plot is centered around Journalist Astra and wheelchair-bound Lola we meet later in the issue. However, as the narrative itself says, there are fifty sides to every story and each character met is brought with a different perspective of the world. Intense employees, mysterious citizens in gas masks collecting samples and talking birds are a few to mention. The minimalistic art really sets the tone of the empty world and David Aja’s art has never looked better in this setting. Surprisingly there’s never a lack of emotion and I’d even say it helps compliment the more intimate moments in the issue.

Astra is intent on uncovering the truth while her boss is pushing for any headline whether it be real or fake. The use of the phrase, tell a lie enough and it becomes the truth, couldn’t be a more relevant subject in the current times. Lola is seen having spent the night with a mysterious stranger who informs her of collecting seeds which she replies “collect or plant?” What is being collected by this stranger from the other side of the wall? Each turning page had me more and more intrigued with what was happening and the plot thread concerning Lola’s mystery man brings lots of questions for issue two.

There are multiple plot threads happening but Ann Nocenti weaves the narratives perfectly without it ever feeling confusing. It’s brilliantly designed artistically and the cyberpunk apocalypse setting drenched in its dark tone is something I personally love. Its revelation at the end of the issue combined with the stories unfolding with each character’s perspective has me hooked and I’d recommend this to anyone craving a dark suspenseful insight into how the world around us is perceived. The world and interwoven stories being told in just this issue alone sets up what is looking to be a brilliant series.