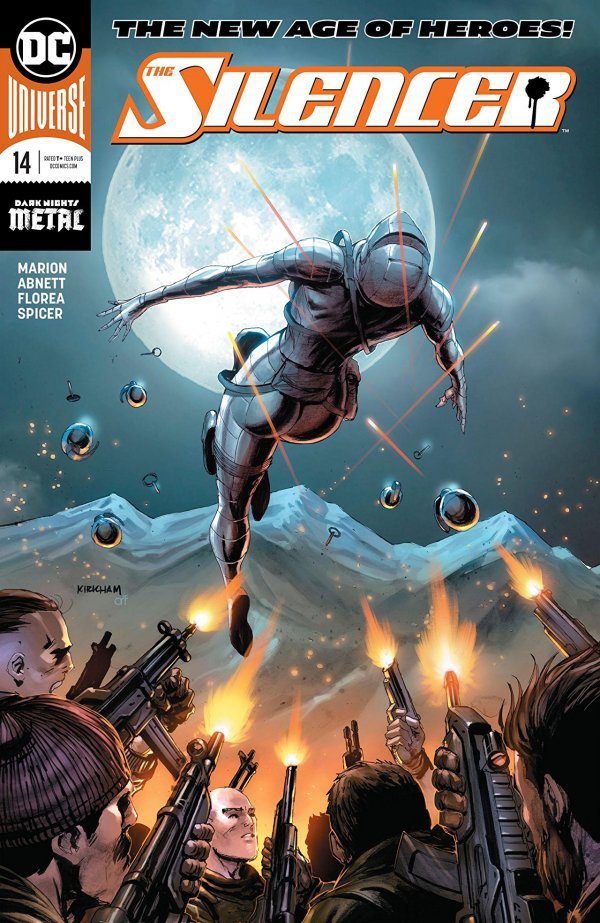 V Ken Marion and Dan Abnett flat-out delivered in The Silencer #14. They start things out with a great opening sequence with Honor Guest playing innocent before tearing through another mess of body-mods. Sandu Florea’s art shines once again, after an impressive showing in The Silencer #13. Mike Spicer’s colors also play very well with the Silencer’s suit fazing on an off.

Honor continues to show she hasn’t lost a step. Her movements are quick and efficient while remaining unrelenting. She is an impressive killing machine.

Marion and Abnett also provide some insight into Honor’s background. We now know how she obtained her impressive powers—and maybe her knack for violence, too. Turns out, she also has a half-brother of sorts. (It’s someone we’ve already met.) Something says they won’t get close anytime soon, though. And it appears she may have a few more “relatives” to deal with.

Furthermore, Honor is playing Talia al Ghul, who’s once again her boss. In reality, Honor played us all. She needs to make sure that doesn’t get her in any further trouble.

Meanwhile, Blake and Ben are back in the story. Blake, understandably, is having a hard time moving on. It seems Blake has made some progress in figuring out who his wife was, too. He doesn’t quite have an answer to who Honor was, but he knows she was hiding something big.

Not to be overlooked in all of this is Tyler Kirkham and Arif Prianto’s cover. They designed the Silencer without a brim on her helmet. Prior to Florea taking over, that would’ve been a nice change. But he’s done so well with her look, so why change it now?

Lastly, Underlife has been inserted into the Silencer’s story. Arsenal put Red Hood on their trail. Maybe they will cross paths at some point?