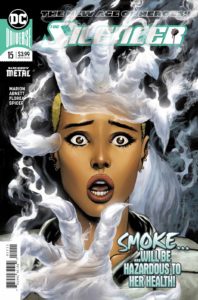 The Silencer storyline has given life to a new, interesting cast of characters. They’ve all fit nicely into Talia al Ghul’s messed up band of degenerates. The Silencer #15 gives berth to another new character but also appears to be the end of another.

First, The SIlencer’s “brother” Raze. he has a similar look to his sister — arguably better — and his powers are much more useful. Whether or not he’s a better fighter without the powers is tough to tell, and something we may never know because he’s apparently dead. Hopefully, Talia brings him back to life, too. It seemed like there was some potential with the family bond and his cold, callous approach.

HIs killer? Of course, another “sister” of his.

At the end of Raze and the SIlencer’s raid of Dr. Splicer’s lab, they come across the only one genetically enhanced guinea pig who isn’t an absolute mess. But there are two problems with her: she’s super powerful and she’s not ready to die.

Smoke is going to be a big problem for Honor Guest, who’s not only on her own in this fight, she now has to keep her “sister away from her son and husband — the last of which is fed up with her, even in “death”.

Sandu Florea remains the best choice to draw Honor Guest and her supporting going list of cool supporting characters. He doesn’t mess around with the violence but doesn’t go too, too far with it.