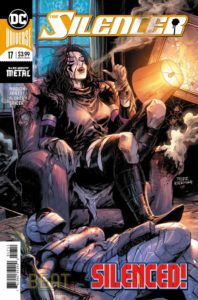 The Silencer #17 set things up for a big finale with the final issue of The Silencer coming in June.

V Ken Marion and Dan Abnett picked things up at Honor and Blake Guest’s home, with Smoke set to attack Honor’s husband and sun. Silencer’s narration throughout the fighting and the stressful conversation with her husband is consistent with what we’ve seen throughout the series. She’s to the point and ready to do what needs to be done, as much as she does always like what she’s doing.

As much as it might’ve been accidental, she did an excellent job giving her husband reason to believe it was his wife behind the Silencer’s mask. Now, she must have some way of altering her voice with the suit. That’s the only way to explain how her husband couldn’t recognize her voice. Honor has been assumed dead by her husband for a while, but it never seemed like it was long enough to forget her voice.

(Major spoilers ahead if you haven’t finished The Silencer #17.)

The action in The Silencer #17 is non-stop once it gets going. It can’t be stressed enough, Sand Florea has done a phenomenal job since taking over. The back-and-forth between Silencer and Smoke has provided the best action this young title has seen.

From the beginning of the issue, Marion and Abnett led us to believe Honor would rejoin her family in some capacity. It seemed like she might reveal her other identity, but now it looks as unlikely as ever. As much as she’ll likely have to suit up in The Silencer #18, The Silencer #17 felt like the ideal time for her to tell Blake the truth. Hopefully, he presses her on the matter. It feels like that’s the only way he’s going to get any answers.