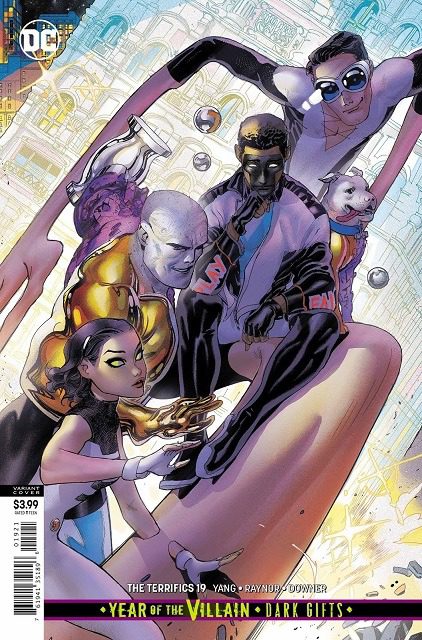 I’ve always had a soft spot for Bizarro. He’s just a weird character in the DCU. Sure, it’s easy to write him off as a mirror version of Superman, but there is so much more to the big lug than that. This issue of Terrifics takes us to Bizarro World and we get to watch the backward talking oaf take on his own adventure, and it wouldn’t be Bizarro unless this adventure had a weird twist to it. So what is Bizarro trying to stop in this issue? Why world peace of course!

Supes doppelganger is on a mission to stop Bizarro-World from becoming a utopia because a peaceful world doesn’t need Bizarro. So this issue plays out with Bizarro time traveling back to the precise moment everything started to get better; the invention of the “T-Globs”, the bizarro version of Mr. Terrifics T-Spheres. But after one failed attempt after another Bizarro decides to take the fight to our Earth and our Dr. Terrific because Bizarro World is destined to become technologically advanced and the only place that Bizarro will be of any use, in his strange logic, is on Earth. So he rallies a mirror team of Terrifics and that’s where our issue ends, with Bizarro and his “Terribles” arriving.

This comic is just pure fun. If you enjoy Bizarro stories then this is perfect. The plot is weak in its logic, but if you’re reading this comic for logic then you are missing the point. It’s entertaining and quick. My one big complaint about the writing and Bizarro is one that I have had since I first discovered the character, and that is the backward talking or reverse meanings. It’s difficult to decipher at times and it slows the enjoyment of the issue down. I understand that this is a staple of Bizarro, but there are times that I just want to skip the dialect.

Thankfully the art in this issue is wonderful. Raynor is a new artist to me and I thoroughly enjoyed his work. While Raynor is a new name to me, I found out that he has been working in the industry for almost two decades. I won’t be surprised to see DC put him on bigger titles in the future. In fact, considering how well he did in this issue featuring Bizzaro, maybe a Superman title wouldn’t be too much of a reach.

The next issue is going to be another fun one as the Terrifics are all going to face off with their mirror images. I’m looking forward to it. Or backward to it? Stupid Bizarro speak!