The Wages of Fear….Overcome in Green Lanterns #17 REVIEW 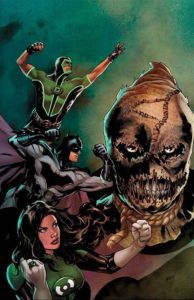 The Green Lanterns an the Dark Knight continue to investigate the seemingly random incidents of fear based attacks that are plaguing Gotham City. Unfortunately, the master of Fear, Scarecrow has found a new way to inflict it on the populace. He has found a way to harness the power of a Sinestro Corp yellow ring in an attempt to feel the fear which currently eludes him. As Batman and Jessica try to find a way to disarm Alfred, who is holding Simon’s gun to his own head, Scarecrow is continuing to experiment on his new found gift in order to unlock the mysteries of fear that he is compelled to solve.

In a finale to this story that tests the limits of Simon’s willpower, Batman and the Green Lanterns confront Scarecrow. As the story 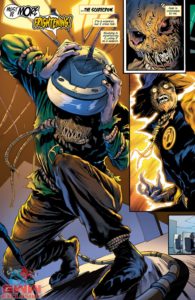 unfolds, Simon comes to a final reckoning with his gun, Jessica steps up in the face of growing fear and Batman finds a Green Lantern that he can work with. The power and reverence that Batman is shown by the young Lanterns is evident when Batman makes an offer to Simon that he absolutely cannot refuse.

The conclusion of this story is satisfying. It ends on an interesting note and leaves enough mystery to keep the reader interested in the next issue. You find yourself asking questions about the story, specifically: Where did Scarecrow get a Sinestro Corps ring in the first place? If it wasn’t meant for him, who on Earth was it meant for? Sam Humphries story is well done and gives a good insight into the obsessive, addictive nature of Scarecrow. Eduardo Pansica’s art is detailed and is well suited to showcasing all three characters.