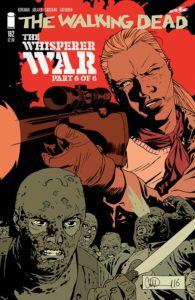 We’re finally to the end of this arc—and lots has happened over the past six issues. We lost characters such as Alpha, Gabriel, and Lucille; the Whisperers burned the Hilltop to the ground; Carl almost died; Lydia fought to protect her new home—the Hilltop; Sherry expressed plans to overthrow Rick; and so much more. Although the issue isn’t chocked full of exciting moments, it provides a nice conclusion to the arc and leaves readers anticipating what’s to come. The story is all about rebuilding from the aftermath of the Whisperer War but little do our characters know the war has just begun.

The issue starts with Negan burying Lucille—something he was unable to do for her in real life. If readers have not pieced it together yet, they should’ve in this issue. Lucille wasn’t just a baseball bat; it symbolized his wife, Lucille, who died of cancer right as people started turning. Soon after the apocalypse started, the baseball bat Lucille gave Negan strength and comfort. He was also able to protect this Lucille and keep her safe, unlike in real life. In the first few pages of the issue, we see him showing raw emotion, as he apologizes and tells Lucille he’ll miss her. Negan’s evolution in the next arc is definitely what I’m most looking forward to. How will losing Lucille change him? Will he be even less empathetic, if that’s even possible? Or will he actually show compassion and give in to emotion? As Dwight’s group makes its way back to Alexandria, Negan feels a bit left out of being welcomed back, as he says, “Okay . . . I get it. I see where I stand.” Does this mean he’s going to retaliate—possibly side with (and likely kill) Sherry to take over? Or is he feeling a bit sensitive, which is a different side of Negan?

It’s not all celebrations, though, as Dwight naively left the battle too early. As he tells Rick that they killed close to one thousand walkers, Rick tells him, “I didn’t see hundreds! I didn’t see one thousand! I saw thousands of them. A sea of the dead that roared like an ocean!” The next two spreads after this scene are my favorites in the issue, as Charlie Adlard shows the roaring waves of walkers making their way toward Alexandria—like a hurricane that can’t be stopped. This was Beta’s plan all along: drive all the forces from the Hilltop, the Kingdom, and the

Sanctuary to Alexandria and let the dead finish what they started. Maggie and co. are headed there, and William tells her that the majority of the Kingdom’s forces are there as well. But the Sanctuary? Sherry is just waiting till Rick’s crew and the Whisperers have exhausted their efforts so she can swoop in. With the size of the herd, it seems impossible for our group—no matter how big and no matter how much ammo they have—to kill all the walkers. It seems as if the group will finally be on the road again, looking for the next safe haven. Maybe Eugene will finally reveal his radio contact, and they’ll make their way to Ohio. This may be how those two plot points will tie together in the following issues.

In the Letter Hacks for issue 157, Kirkman teased that Gabriel, Dwight, Laura, Negan, Magna, Michonne, Jesus, Maggie, Herschel, Carl, Lydia, Dante, Aaron, William, Eugene, Andrea, and Rick “will have drastically different lives five issues from now. If they’re still living.” I guess that’s all true, but of course, I thought that meant more people were going to die. I think the changes he teased will continue into the next arc, however. Perhaps those who are still alive from the sixteen will make their way to Ohio.

Have you seen this:
Seven to Eternity #14 (Review)

Adlard’s design continues to be consistent in this issue as it’s been throughout the arc—using a sixteen-panel grid to fit in as much action as possible. He does a good job of including a variety of panels—some full-page spreads, some that are a sixteenth of the page, some quarter-sized ones, and so on. The full-page spreads are always some of my favorite because he can showcase a lot more detail. The one of William looking out to the Hilltop burning is a great one, as is the spread showing the massive herd of walkers. 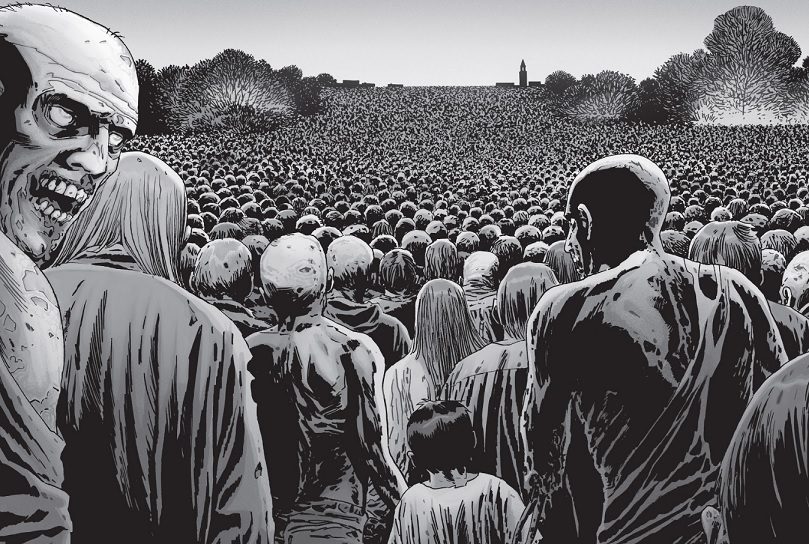 The cover features Andrea sniping a Whisperer. Dave Stewart’s colors parallel the red and yellow he used throughout the arc. Adlard made an interesting choice for the last cover of the arc, as if, again, to say the war is far from over. One Whisperer even has a knife in hand, showing 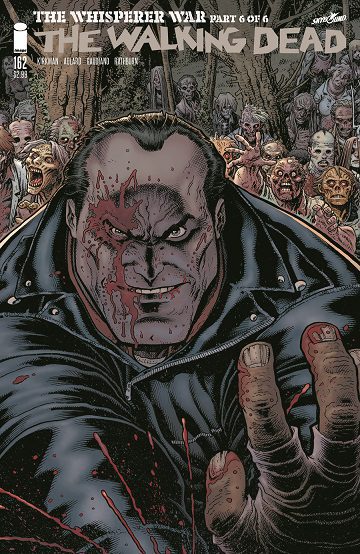 that they are not backing down. Arthur Adams and Nathan Fairbairn’s variant cover features Negan. Unlike the characters on the other covers, Negan isn’t really engaged in the battle, and he’s front and center, taking up about three-fourths of the cover. He’s got blood on his face and his hands, but he has his back to the herd behind him, staring straight ahead. He has no sense of fear, or even exhaustion, on his face. From his expression, he almost seems excited—again something that sets him apart from the group. I’ve enjoyed the amazing artwork on the variant covers, especially when you see them all together.

Well, is this the end of the Whisperer War? It seems the Whisperers have won or will. How can Rick’s group possibly combat an ocean of walkers? I guess we’ll find out in the issues to come, but I’m hoping Kirkman switches up the story a bit and puts our group back on the road heading toward Ohio.