It’s been almost a decade since Marvel Studios gave us Iron Man and began creating a connected film world that brought our favorite comic book characters to life on the big screen. Now with the release of Thor: Ragnarok next weekend, we will have our 17th installment in the wondrous world of the Marvel Cinematic Universe! This 3rd film in the “Thor Trilogy” is a notable departure from the first two chapters in so much that it is laden with quite a bit more humor than the preceding movies even though the stakes are much higher for the Odinson than ever before. After the events of ‘Avengers: Age Of Ultron‘, Thor (Chris Hemsworth) has been following his recurring visions in an attempt to ensure Asgard’s safety from outside threats. Upon his return, he realizes that Loki (Tom Hiddleston) has been impersonating Odin (Anthony Hopkins) and ruling Asgard in their father’s place ever since the final events of Thor: Dark World. On their way to find where Loki banished Odin, they are introduced to Odin’s first-born; Hela the Goddess Of Death (Cate Blanchett). Hela easily defeats both Thor and Loki resulting in their being dumped on to a remote planet called Sakaar which is ruled by The Grandmaster (Jeff Goldblum). Thor can win his freedom in the gladiator ring if he defeats Grandmaster’s champion – The Incredible Hulk (Mark Ruffalo)!! Meanwhile, Hela is intent on ruling all of the Nine Realms but cannot leave Asgard because Heimdall (Idris Elba) has stolen the Bifrost Sword. Will Thor be able to find a way home and, even if he does, will he be able to defeat his elder sister Hela and prevent Ragnarok? Or will this finally be the end of fabled Asgard? 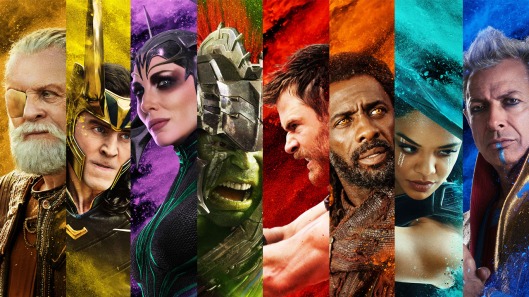 Once more, Marvel has brought an incredible movie to the fans which gives us specific character focus while also still moving the overarching story of the combined Cinematic Universe closer to the climactic showdown with Thanos in next year’s Avengers: Infinity War. The cast of ‘Thor: Ragnarok’ may be one of the most impressive of any Marvel film to date! Cate Blanchett is terrifyingly perfect as Hela as she embodies the beauty and horror of The Goddess Of Death combined with the smoldering rage of the prodigal daughter come to forcibly take what she believes to be her rightful place as ruler of Asgard and beyond. Returning players Chris Hemsworth, Tom Hiddleston and Idris Elba are excellent as always in their respective roles and it was fantastic to see more action from Elba’s Heimdall than we have been privy to in previous installments. The standout for me was Jeff Goldblum who chews the scenery as The Grandmaster in his own Jeff Goldblum-y style. Tessa Thompson is equal parts badass & divine in her portrayal of newcomer Valkrie and I’m hoping we get to see more of her character in future offerings from Marvel Studios. 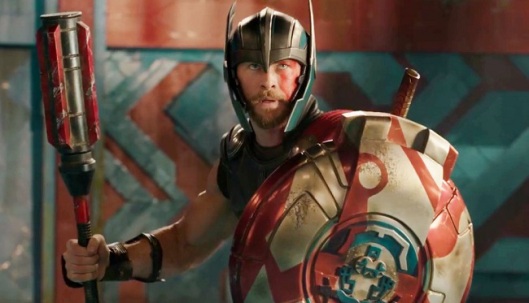 While this film is certainly my favorite of the three Thor movies, I still found a few little details that slightly bothered me. The previous two Thor films had a weighty gravitas to them that portrayed the style with which I’ve grown accustomed to seeing Thor. Almost Shakespearian in tone, if you will. This film almost had too much humor and felt more like an extension of Guardians Of The Galaxy‘ than of Thor. It also felt like a 70% Thor film and a 30% Hulk film simply because Marvel has neglected to do anything with Hulk outside of his 2008 standalone movie and then the two Avengers films. (Not entirely their fault as they have legal hurdles to overcome with Universal still owning the distribution rights to the character.) There was also a scene with Odin & Thor that was a little too Dumbledore-esque for my tastes. Again, these are small wrinkles and, to me, easily overlooked given the clever plot that almost seamlessly combines the Ragnarok story from the Thor books together with the now classic Planet Hulk saga. I also loved the 80’s look and feel of the graphics and colors in the film and the style of music throughout. While certainly not the best of the MCU films up to this point, Thor Ragnarok is still an impressive outing for the franchise and one that you should definitely get out there and see sooner rather than later!! AND… there are TWO post-credits scenes on this one so if anyone tries to get you to leave the theater before they both play, hold Mjolnir high over your head and tell them “NAY!!”