Martin McDonagh is known for Dark and poignant comedies that often surprise audiences and have you laughing uncomfortable throughout. Three Billboards Outside Ebbing, Missouri is maybe one of McDonagh’s more serious stories but still doesn’t hold back and even in its darkest moments, you will find yourself smiling. McDonagh likes his characters to suffer and it’s safe to say Three Billboards Outside Ebbing, Missouri doesn’t shy away from putting its leads through the ringer, but it does so in such a delightful manner you eagerly want to see what other troubles these characters can attract. Three Billboards is McDonagh’s most grounded and emotional film yet, as we face loss, failure, pain, and regret head on and without a filter.

Everyone deals with loss in their own way and in Three Billboards Outside Ebbing, Missouri, Mildred (Frances McDormand) choices a decidedly direct approach to deal with the murder of her daughter and the local police department’s failure to find her killer. She purchases add space on three rural Billboards on the road leading to her home which is also the place her daughter was brutally murdered. The billboards simply put the attention on the local police and specifically Cheif Willoughby (Woody Harrelson) in a very dramatic way. Immediately upon their set up the town knows who put them there and why leading to an emotional and often funny back and forth between Mildred and Willoughby as he pleads to have them taken down. To further make things worse for the Chief and his local police officers, Willoughby is dying and doesn’t want this to be his legacy.

Determined to set things right Willoughby’s most enthusiastic officer Dixon (Sam Rockwell) takes matters into his own hands to try and get the billboards taken down by any means necessary if it costs him the thing he loves most. Mildred and her billboards cause the town and its residents a ton of trouble as she battles almost everyone for her right to challenge the police. In this extreme griefing process both Mildred, Willoughby and Dixon find themselves facing truths they never intended to face. 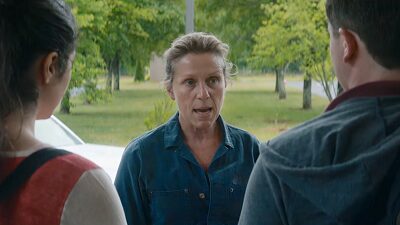 McDormand commands the screen as Mildred and while I didn’t always agree with the decisions she made or how she handled herself, I couldn’t help but relate and wonder how I would react having this atrocity happen to my daughter. McDormand flawlessly forces you to feel her grief even in moments of extreme levity. She isn’t perfect but wants what we all would, justice and closure. My favorite aspect of the film and by far the most interesting was watching Sam Rockwell immerse himself in the role of racists, overzealous cop who always has something to prove. Rockwell honestly steals the show as you love to hate him and then grow to genuinely feel for him by the film’s end. Wathcing his arc is one of the few times I really enjoyed seeing the villain try to become the hero and if it wasn’t Rockwell in the role, I’m not sure the necessary good ol boy charm needed to pull of this role would have been acheived. Harrelson’s Willoughby also has his moments especially towards the climax of the film, but his role felt more like a plot device than a character we are meant to fall for. Three Billboards supporting cast also deserves a ton of credit as they make this small town feel alive and really give the movie that small town, midwest feel. I especially loved seeing Peter Dinklage, playing the loveable and single town dwarf as he was both funny and has some great moment with Mildred in the movies back half. 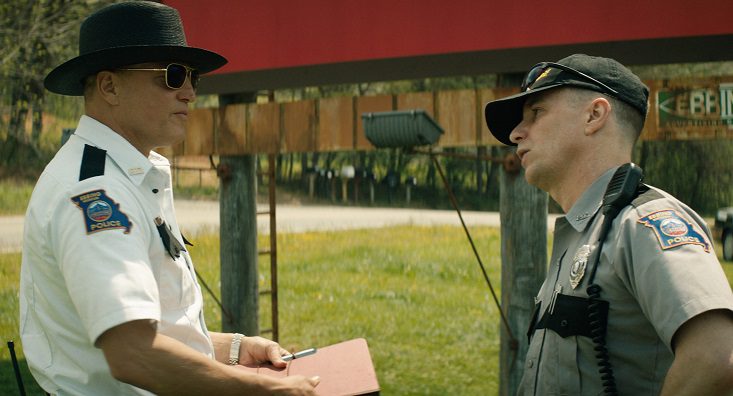 Three Billboards Outside of Ebbing, Missouri will definitely come up when its time to talk Oscars as it seems to hit all the right notes to perk the academy’s ears. While the story feels small and extremely timely McDonagh does everything he can to make Three Billboards and emotional rollercoaster that will have you laughing, crying and gasping throughout. Even though Three Billboards does fumble its message a bit at times and doesn’t exactly stick the landing as I felt it could have ended two or 3 times before it did, McDonagh has created his most insightful, funny and emotionally charged film to date.