My Time at Long Island Who 5 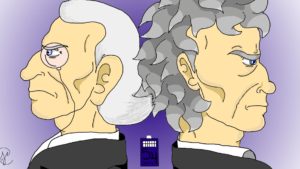 On the heels of Thanksgiving Day, why not share something I’m thankful for? Why… Doctor Who of course! Ironically, yesterday was also the 54th Anniversary of the show’s debut. I wanted to write this yesterday, but with the turkey cooking, well… I was working on other things (an animation if you must know, as well as keeping the peace amongst the folks).

What could I possibly talk about that I haven’t discussed already in my premiere article on this site? Well, how about the awesome Doctor Who convention I attended at the beginning of this month? Sounds good, right? Of course it does! 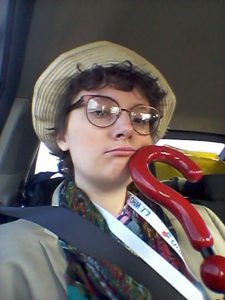 This year marked the fifth year of Long Island Who, a Doctor Who convention based in Long Island, created by the wonderful Ken Deep. It’s a lovely, small convention where Whovians from all over flock to mingle, share stories, show off their cosplay, trade the ever popular ribbons, shop the amazing Who-wares, and of course, meet the stars. I attended last year for only a day, just to get my feet wet as I never attended a convention of any sort before, but I vowed that the next year, I would go all three days, and truly experience this convention. While I did go for all three days (well, I left terribly early on Sunday), I doubt I truly experienced everything! There’s just so much going on, it’s amazing!

One would need a time machine to attend everything…

I’m sure you want to know who the guests were, right? I mean, that’s the main attraction for any convention!

The main Doctor this year was none other than Sylvester McCoy, the incredible Seventh Doctor. I had dressed as him last year, and on Sunday this year, but sadly, I never got to meet him in costume.

The other just as equally amazing guests were:

- Waris Hussein, who was the director in 1963, working alongside Sydney Newman, Verity Lambert, and the first Doctor himself, William Hartnell. He was the convention’s guest of honor. I sadly didn’t get to meet him firsthand, but he was a lovely man through what I saw of him. I hope I have another chance to meet him someday. 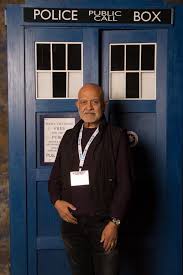 - Lalla Ward, who portrayed Romana’s second incarnation, alongside Tom Baker in the late 70’s to the early 80’s. She was a very reserved woman, almost certainly iconically British to a tee, but she was a very lovely woman. She was very polite, warm to the convention goers, and certainly a pleasure (and an honor!) to have met. 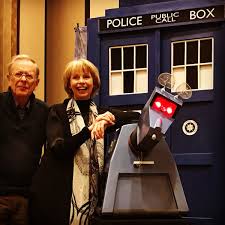 - John Leeson, the voice of everybody’s favorite tin dog, K-9! Oh he was a delight, very personable, and wanting to nearly talk to everyone he crossed paths with: very much excitable like a dog himself! It was an honor to meet him, and I was glad to see he personally held the drawing I made him when he left the photo session I attended. I met him several other times throughout the convention, and I can say, I would love to meet him again. Maybe I’ll make him a small plushie K-9 the next time I meet him….

- Frazer Hinez, the incredible Jamie McCrimmon (also the inspiration behind the Outlander series). He’s the nicknamed Godfather of L.I.WHO, and he’s attended every year since it’s conception. 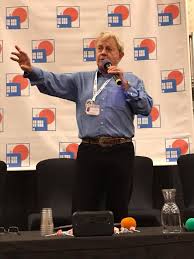 - Katy Manning, the lovely companion Jo Grant, as well as an alternate reality Doctor in her own right as Iris Wildthyme in Big Finish Audios. I bumped into her the moment I arrived at the hotel, and continuously met her throughout the convention, got several hugs from her – even a goodnight kiss – and I’m so glad she enjoyed the drawing I made for 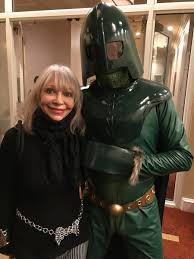 her, saying it was to be hung up in her drawing room. Such a wonderful woman. I hope to meet her again someday.

- Ingrid Oliver, the incomparable Petronella Osgood! Another amazing person to meet! I only met her during the photo session, and very quickly at the autograph session, but she was incredibly nice. During the photoshoot she placed her arm around me, and I just stood there going *oh my goodness, her arm is on me!* I gave her my drawing of multiple Osgoods (I called it the Osgood Invasion) and she loved it! She said “That’s how it should be”, in regards to the multiple Osgoods.

- Richard Ashton. Now, I’m sad to say I didn’t know the man. He played Friday the Ice Warrior in “Empress of Mars,” and apparently he’s in a multitude of other shows I have never seen. However, with that said, he is a very nice man, with wonderful stories, and quick to forgive a silly girl who didn’t recognize him, and asked who the main star was to be at our dinner table – I was quite embarrassed. We did take a picture together, and talked for hours. And Richard, if you happen to see this, I cannot stress how embarrassed I was in not recognizing you. 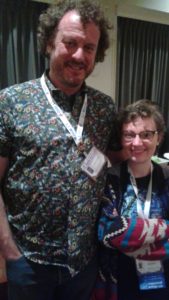 - Oh! And how could I forget Doctor Puppet! Yes, the incredible team behind the stop-motion adventures of Doctor Puppet were there as well, and I finally could meet Alisa Stern in person, the person who encouraged me to finish my animation, and was more than happy to answer any questions I had about animation. I gave her the knitted Davros doll she suggested I create. I asked on twitter for some doll dares, and she suggested Davros, so naturally I had to give it to her! I also got a picture – albeit a slightly blurry one – with her Nardole doll, as I had knitted the hat for the puppet. 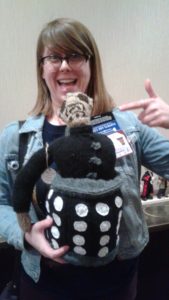 I had dressed as the Eighth Doctor on the first day, a character portrayed by the lovely man, Paul McGann (whom I had met the year prior), in his Big Finish Audio garb. Sadly there are no pictures, as I hardly stayed still long enough to get one! The next day was when I took all the pictures, and I was dressed as a relatively unknown Doctor Who villain known as NoBody NoOne (he is from the Big Finish Audios). Of course with my purple eyebrows I looked rather manly… good job, haha. Third day, as mentioned, I dressed as the Seventh Doctor, which I must day is, by far, my most favorite outfit. Basically I spent my whole time with my cosplay friends, on line for autographs, on line for pictures, and shopping my little Who-heart out in the vendor hall (wow I bought so many books and Audio plays! I’m set for life! Or, at least until next L.I.Who!).

This convention is the best introductory convention. It’s smaller than most, and you can mingle freely with everyone, including the guests if they’re so inclined. Everyone who attends is amiable, and more than willing to take pictures with you, and talk about anything really. I met some of my best friends from this convention, and I cannot wait for next year! I think I shall plan my next cosplays…. Who shall I cosplay as? Haha.

If you wish to hear a much lengthier version of my time at LIWHO this year, along with a bunch of pictures, I have a video review on my YouTube channel “TimeLassCreations.”

I talk WAAAY too much, haha.

Convention Doctor Who long Island who
Add your voice!Join the conversation on Discord...
Join Our Discord