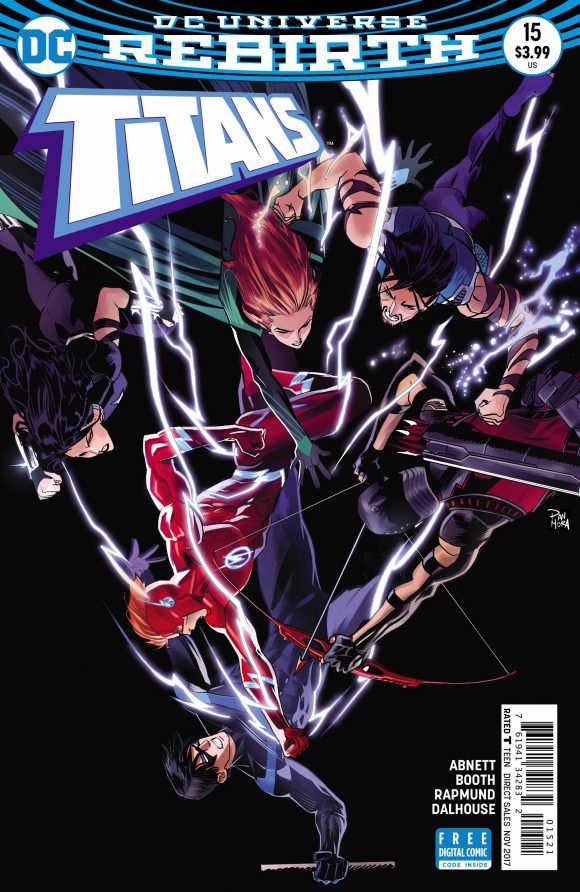 There is a traitor among the Titans. The tensions starts off at breakneck speed as Roy Harper is certain he has figured it out Nightwing is the traitor when he overhears him talking to the H.I.V.E. Roy’s got an arrow point at the back of Nightwing’s neck but little does Roy know that Nightwing was implanted with spyware that allowed H.I.V.E. to access everything that Nightwing saw or heard. Before Roy can shoot Nightwing, the Flash swiftly intervenes and asks that everyone just put their card on the table. To the shock of the Titans, Nightwing admits to being a spy, but it was an elaborate way in which to know the whereabouts of the H.I.V.E. as he was able to trace the spyware’s origin.

Nightwing and the Titans head to Delaware to confront Psimon. A cutaway scene to Gnaark and Malcolm Duncan who are also trying to figure out how to restore Karen Duncan’s memories while the rest of the team is preoccupied with finding the traitor. While incarcerated at Rikers Island Correctional Facility, Psimon’s powers increase and he is able to control Gnaark and Mal who are

now hellbent on killing the Titans. The Flash is having health problems as of late and needs to take it easy. He is wrestling with the idea of resigning, but will he? Will Gnaark and Malcolm be able to defeat the Titans in this exciting issue?

Dan Abnett’s prescription for boredom must be writing Titans because just when you think you have the story figured out he throws a curveball to make you wonder what’s coming next. There is very little fancy jargon that otherwise would bog down a good story. Excellent characters to follow. To tell you the truth, I had to look up Gnaark. Dan and company pulled him out the treasure chest; dusted him off and gave him a good look instead of the caveman I saw online. There is a funny bit that adds an air of levity to the tense story. The casual reader will notice it. Brett Booth’s artwork is stunning as his ability to capture details of the human body, especially facial features, which show a character’s emotions. He is skilled at showing the emotion of anger as is usually the case with Roy Harper

The title is on my pull list at the comic book store if that says anything about how much I enjoy the writing, art, and characters. Titans #15 offers a lot of excitement and gives a seamless flow of sequences with captivating dialogue, and artistic rendering of the characters.