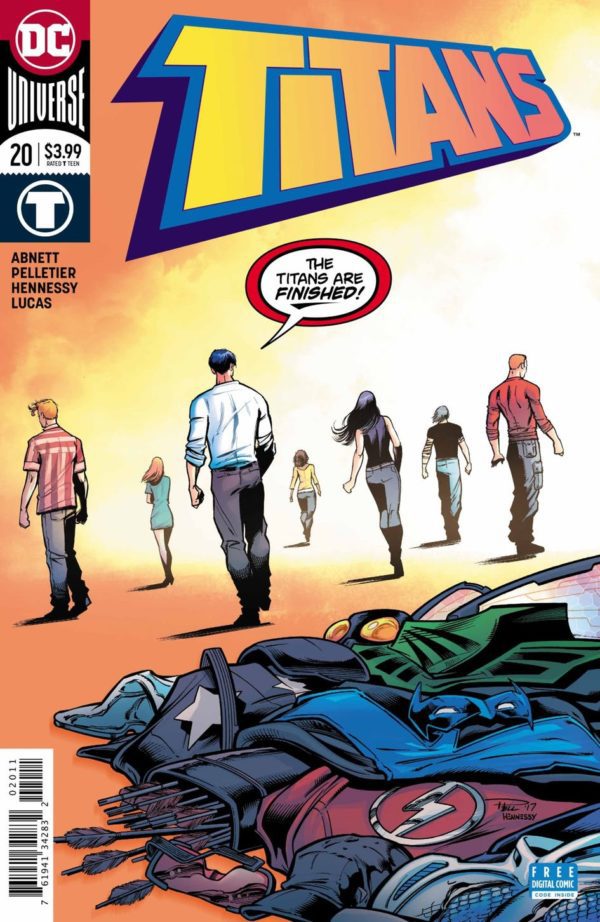 I’ve always thought that the very notion of “super friends” was absurd. Typically superhero teams are full of cliques, and often there are one or two people who outwardly despise one or two others.

Titans has put that theory to rest for me.

Not only are the team members super friends in their own right, but they know the value of what have which is why they fought so hard to keep it in Titans 19. When they failed it was all but certain that the aftermath in Titans 20 would be exactly as bad as it appears.

Titans 20 primarily follows Roy Harper as he wages a one-man drug war against Intergang. Other Titans appear in passing: Donna is being held “for tests” in Justice League headquarters; Dick Grayson is helping Wally West move into his own place; and Karen, Lilith, and Garth appearing only via dialogue. The Roy Harper story thread is where most of the action is as he connects with old “friend” Cheshire who helps on a final drug raid. After the raid’s success, the duo ends up at Roy’s apartment with pizza, non-alcoholic beer, and an unexpected bout of passion and backscratching. Before Roy wakes, Cheshire makes off with the seized drugs.

The issue opens in an action sequence with Roy Harper under fire. Paul Pelletier’s pencils and Andrew Hennessy’s inks make these first three pages dynamic while successfully depicting a righteously pissed-off Roy. Then Pelletier makes an unusual choice for Cheshire’s entrance: he rotates and slightly skews the final two pages of the fight—an inspired choice to show that Roy’s circumstances in the battle have changed as well as provide foreshadowing for the impact Cheshire has on Roy later in the issue.

Speaking of “pissed off,” Pelletier and Hennessy spend quite a lot of Titans 20 depicting characters almost exclusively on the negative spectrum: disappointment, anger, resignation. Meanwhile, happiness is limited to Cheshire and Roy (but only when he’s with Cheshire). It’s telling that only the villain is depicted happy for any extended period. 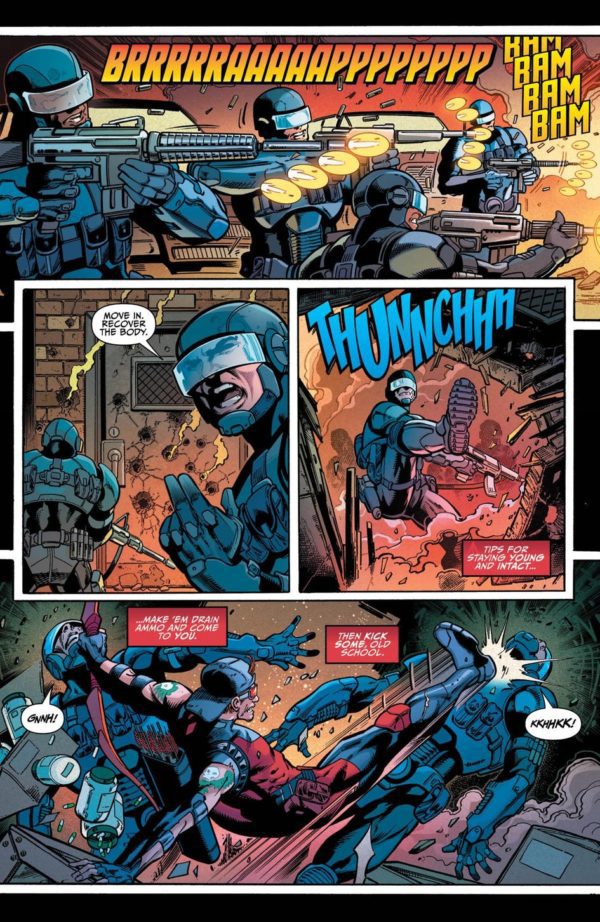 Featuring only one real plot, Titans 20 does have two distinct themes. Of them, the secondary is the open question of whether the Titans will get back together. Donna’s a prisoner—Wonder Woman doesn’t even pretend that’s not the case when Donna calls her on it. Supposedly she’ll be released as soon as tests show she isn’t dangerous, but Donna can see the writing on the wall: that’s not going to happen. Meanwhile, Dick and Wally are in full civilian mode, moving Wally into his apartment. Dick goes through the motions, saying the Titans will be back. Wally, though, puts a voice to what Dick and Donna were clearly thinking:

The issue’s primary theme is the risk of losing the support structure of close friends, and Dan Abnett’s storytelling skills are strongest when tackling this part of the issue. Roy Harper is a recovering addict. With the Titans disbanded he has only himself to rely on. He thinks he’s safe from falling into the pit because he’s been down in it before; he knows where it is. When Cheshire suggests they work together he agrees because he’s lonely, because he has no one else, and because he believes he’s in control.

Unfortunately, this is the worst choice Roy could make. That she used him and seduced him to steal the drugs they’d captured from Intergang is a certainty. Did Roy use that night? Not that the reader saw, so presumably not intentionally. Did Cheshire slip him something? Unknown. Roy’s reaction says it best:

This penultimate page is elevated by Pelletier’s, Hennessy’s, and colorist Adriano Lucas’ decision to hide Roy’s face when he walks into the well-lit living room and finds the missing drugs.

Whether made up of friends or family, a support network’s value can’t be overstated. Deprived of that, Roy Harper set off to prove he was just as capable by himself. He failed. The consequences are exactly what he tells us they are: falling in a pit. The Titans need each other in a way that the Avengers or the Justice League don’t, and nothing proves that better than Roy’s fall.

Dan Abnett Paul Pelletier titans
Are you an Insider?News, reviews, & updates are just the beginning.