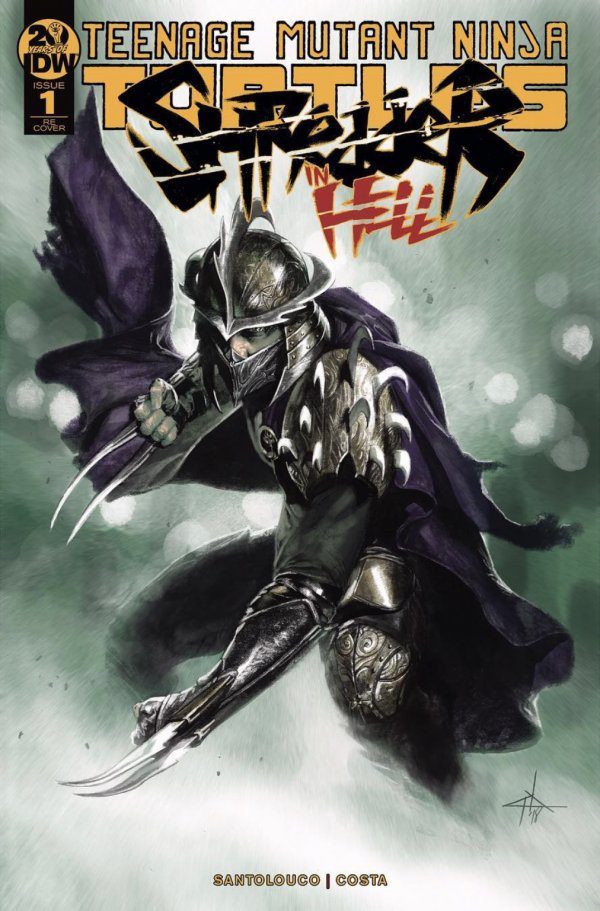 First off, Mateus Santolouco is an absolute machine. He not only wrote and drew Shredder in Hell #1, but he was also responsible for the main cover, too. And his cover is absolutely sick. Shredder looks like he’s exhausted and battle through several levels of Hell to get where he is in the cover, only to face an overwhelming enemy.

Santolouco didn’t just deliver with his cover, either. That was just the start. (Rafael Albuquerque’s Retailer Incentive Cover was awesome, too, for what it’s worth.)

Oroku Saki has moved on to the afterlife and is dealing with a lot. He’s got Splinter, or likely a Splinter hallucination, trying to help him—supposedly. Then there’s the part about Shredder battling Takeshi Tatsuo, his previous incarnation. Not to mention the woman he loves isn’t exactly helping the situation.

So, there’s a lot going on with Shredder at the moment. Truthfully, he may not be able to handle it all and it could cost him. (Given he’s a total control freak, this could be his version of hell.) Although, he’s already in pretty much the worst place anyone can be. What’s the worst that could happen?

Santolouco’s story is off to a strong start, coupled with his impressive art Marcelo Costa’s stellar colors, which are constantly evolving from page to page, depending on where Santolouco is in the story. As much as a story centered on Shredder should guarantee a dynamic story, there needs to be some serious action. Santolouco provides that, and it doesn’t look like that’s going to slow down any time soon.

If you’re looking for a mini-series for a change of pace, this is a great place to start. It’s a character-driven story with a dark tone, a good pace, and great artwork, what more do you need?