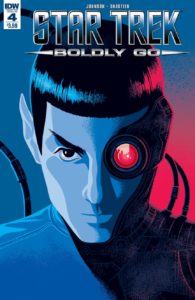 Star Trek Bodly Go #4 hits the ground running. Captain James T Kirk, interim Captain of the U.S.S. Concord has himself and his crew facing unfavorable odds. Commander Spock has been abducted by the Borg. Kirk has no choice but to chase down the Borg vessel through Romulan space without the permission of the Romulan Star Empire.

In this issue writer Mike Johnson does a great job weaving in characters, alien races and foes from all over the Star Trek Universe. At the start of this story arc I was not convinced that mixing Romulans, the Borg and 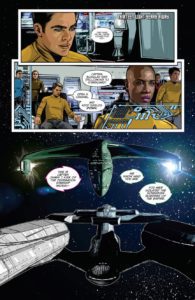 the original characters from the Kelvin timeline would work, but Mike did it. I am not sure if Mike Johnson is a Trekker or took the time to research everything Trek, but he has a decent knowledge of the subject matter and has cracked the formula for translating this series to the page. He also handles the “how to bear the unbeatable villain” in a pretty convincing twist.

Artist Tony Shasteen has done an awesome job this entire series so far. There is a fine line that an artist has to walk. The characters can be photo realistic or too “Saturday Morning Cartoon”. Tony’s ability to take an actual actor from the big screen and translate their image to a comic book page is pretty amazing. I also really enjoy how he sets the mood from page to page. You can look at a panel with nothing but a star field with a rogue planet and know whose region of space in the Trek universe you are supposed to be in. Well done!

Through this first story arc, the partnership of Mike Johnson and Tony Shasteen have done an outstanding job. I completely enjoyed this book even though I was reading it with my usual Trekker pessimism. I was highly entertained and look forward to more collaborations from Mike and Tony.