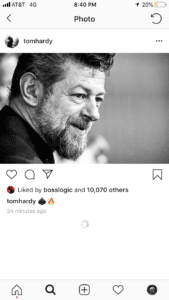 After The Hollywood Reporter reported last week that ‘Mowgli’ director Andy Serkis has met with Sony about helming ‘Venom 2’,  ‘Venom’ star Tom Hardy has confirmed the director’s involvement via a new Instagram post, which you can see below.

Serkis, best known for his roles as Gollum in the ‘Lord Of The Rings’ movies and Caesar in the ‘Planet Of The Apes’ movies, made his directorial debut earlier this year with Netflix’s ‘Mowgli’, an adaptation of the classic novel ‘The Jungle Book’. He also directed the 2017 movie ‘Breath’, a biopic about Robin and Diana Candevish which starred Andrew Garfield and Claire Foy.

The first ‘Venom’ movie was directed by ‘Zombieland’s Ruben Fleischer. Tom Hardy, Michelle Williams, and Woody Harrelson all starred in the pic and are expected to return for the sequel. It will likely release in October 2020.

Have you seen this:
NEW BATMAN and superman animated series coming to hbo max and cartoon network
venom