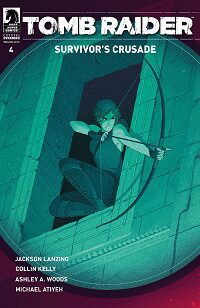 Tomb Raider: Survivor’s Crusade is a tricky one for me to review. I’m pretty so-so on Tomb Raider– not that I don’t like it, I do. The reboot games specifically, since they are written by Rihanna Pratchett and I trust her implicitly. But my knowledge of the franchise is pretty shallow. The thing about most tie-in comics is that they usually work best with people who at least appreciate the property they are based on. As far as I can tell, this is not only a tie to the recently released movie but also a reboot of the Tomb Raider comics.

The first thing that strikes me is the excellent cover art by Hannah Fisher, which has been consistently dynamic and true to the Lara Croft character. Throughout the four cover she has illustrated, we see Lara exploring, defending and escaping peril. These covers do a lot to attract the reader but sadly the same could not be said for the comic itself.

I hate saying this because Ashley A Woods has done stellar work for Niobe and Ladycastle, and it gives me no pleasure to tell you that the artwork in Tomb Raider: Survivor’s Crusade is a little… choppy? Rushed? The movement is awkward, the proportions are all over the place- even Micheal Atiyeh’s colors seem a little off, though not consistently. Some of the more grand scenes are beautifully colored. It feels like someone rushed Woods along, never giving her time to let her style breath. Niobe, in particular, proves she can deliver on epic fantasy and gorgeous landscapes. The one consistently great aspect of the art in Tomb Raider: Survivor’s Crusade, is the locations. Over the course of this series, Lara has traveled from Italy, to Thailand and to Egypt (among other places). And they all look amazing.

The writing doesn’t fare that much better, to be honest, despite a solid set up. Lara is in the midst of tracking down an artifact, one linked to Trinity, a Christian cult responsible for her father’s death. At the beginning of Tomb Raider: Survivor’s Crusade #4 she has confronted Trinity soldiers in an Egyptian temple that she and her father once toured together. She believes this to be somewhere no one else but them knows about but through narration, we learn Trinity is referring to it as Craft Site Alpha, after her father. The narrator is the leader of the paramilitary group, who stalks her in an attempt to take her out. This is an interesting take, a chance to see Lara the survivor from the outside. She is ruthless, just as she was in the reboot games, and from this side of things, it makes her look cruel. However, given that she is y’know surviving, it’s understandable.  I forgot this aspect of her character and it’s good to be reminded that, yes, she has to do some pretty unsavory things to survive- especially to the artifacts she is supposed to admire. I’ll admit Lara is pretty badass- though I only wish this story didn’t feel so flat. The whole story, like the art, feels like it isn’t given enough room to breathe. At times, it was difficult to follow and engage with. I’m not sure Tomb Raider: Survivor’s Crusade really needs two writers. It might even be a case of too many cooks, over complicating a pretty straightforward story.

This series could likely have been rushed, perhaps to get it out in time for the movie. Rushed, along with flat, feels like the adequate terms to describe this comic, and this series, so far. I hope it improves, as I really think the whole team deserves a better chance at getting Lara Croft right. Also, on a small note, can Lara finally move on from avenging her father? I have yet to read the other comics, so maybe she does there, but it would be a nice change up for recent Tomb Raider media.

Despite all this, I would still encourage you to give it a go if you’re a fan of the Tomb Raider comics already. Perhaps the art will not bother you (again- please read Niobe to see a better representation of how talented Ashley Wood is) and maybe you will get more from the story than I do.