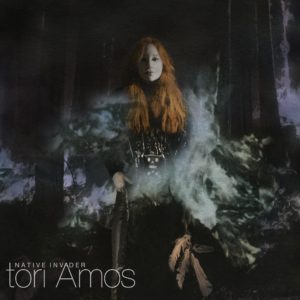 The original impulse for Native Invader came from Tori’s desire to reconnect with her Eastern Cherokee ancestry on her mother’s side, during a trip to North Carolina’s Smoky Mountains. However, the initial focus of the album was drastically influenced by two major events: the US presidential election, and a severe stroke suffered by Tori’s mother, Mary Ellen Amos, that hindered her powers of speech.

Consequently, Native Invader is a tumultuous mixture of social observance and personal anguish. With the help of the Muses 9, as Tori affectionately calls the forces that speak to her through melodic light, Tori bolsters Mother Nature as a main character, who serves as the perfect metaphor to rumble the frustrations of the current political dissonance tearing the US. “Nature is a character on the album and speaks in different ways,” Tori explained in an interview with Nylon earlier this month. “She’s bringing the buffalo across the plains.”

The politicized environment the world finds itself permeates through Native Invader. Tori invited nature to “come and co-create to represent what the country is going through,” she told Nylon. The highly produced 13-track album, reminiscent of 1998’s From the Choirgirl Hotel, weaves concepts of the violent forces of nature that leaves paths of destruction with subliminal messages of protest and resilience reflective of nature’s healing power that brings renewal and growth.

Tori sings of uncharted territory “standing on the edge of the cliff,” while she braces for an approaching storm, in the album’s lead single, “Cloud Riders”. “I am not giving up on us, I am not going anywhere soon” she sings, as she promises to ride out this storm together.

“Up the Creek”, is the album’s second offering featuring her daughter, Natashya “Tash” Hawley, who lends guests vocals. More political and pulsating than the kaleidoscopic “Cloud Riders”, Tori tributes her Native American grandfather’s saying “Good Lord willin’ and the creek don’t rise,” and calls to a “militia of the mind” in a whirlwind of strings, guitar and piano. Tori also reminds us that “when hope is almost gone, you know that’s the time we must stand.”

Tori recently dropped “Reindeer King,” the third sample and first track of Native Invader. The seven-minute dreamscape introduces you to the album as if you’re entering another realm, with her undeniable piano-based sound, haunting vocals, and ambient sounds.

“The record looks to Nature and how, through resilience, she heals herself,” Amos previously explained in a press statement. “The songs also wrestle with the question: what is our part in the destruction of our land, as well as ourselves, and in our relationships with each other?”

Tori also gently echoes the pain of her mother’s stroke and honors her in “Mary’s Eyes”, the last track on the album. “Hopefully people will find strength and resilience within the songs to give them the energy to survive the storms that we are currently in.”

As one of the most influential artists of our time, Tori has explored various social topics and expanded her prolific interpretation of light musically, as evidenced in albums such as her acclaimed Boys for Pele (which fans rejoiced over the release of a 20th album anniversary last year with a deluxe reissue stocked with B-sides and other previously unreleased tracks), Strange Little Girls, The Beekeeper, and Abnormally Attracted to Sin. Her new album is no exception.

Native Invader exudes, with acute perceptivity, the inclement environment we find ourselves in, enveloping the vulnerability, sentimentality, tenderness, and strength only Tori could communicate through her music. Quite simply, Native Invader offers the sonic reflection we need.

The Native Invader World Tour is scheduled for Europe and North America this year. The first show is on September 6 in Cork, Ireland and concludes on December 3 in Los Angeles, California.

The complete schedule is available here.