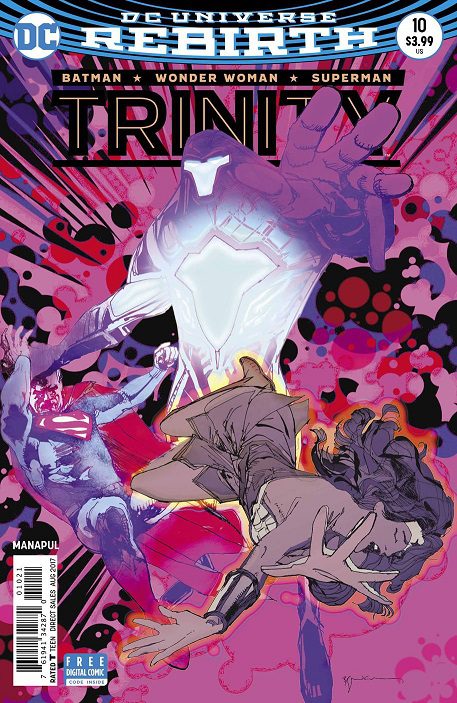 In the second part of the Dead Space storyline, Batman and Flash are trying to save a broken and dying Cyborg while trying to escape from an infected Aquaman. In an attempt to slow down the Atlantean without hurting him too badly, they determine that Arthur is fighting the infection and he gives them a cryptic message as they continue to struggle. Superman and Wonder Woman are with the alien visitor who shows them a vision of its dying world and tells the pair that the alien infestation is to blame for the destruction of its world.

As Cyborg’s systems and life signs continue to fail, the Watchtower is getting closer and closer to getting caught in Earth’s gravity. The alien tells them the only way 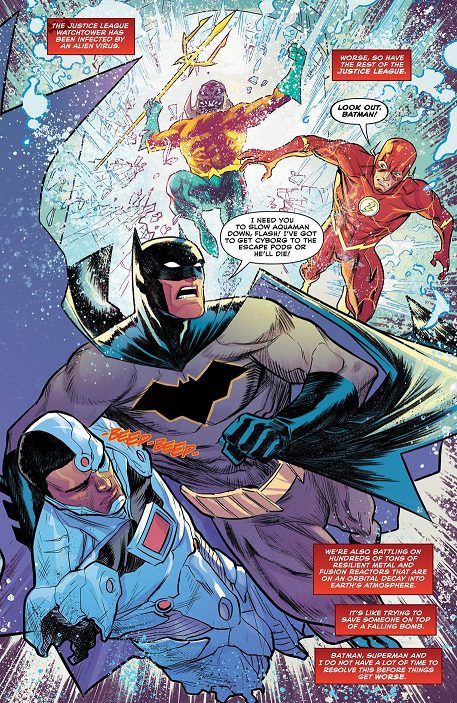 to stop the infection from spreading to the surface is to allow the alien’s ship to self-destruct killing the aliens along with the League. As the choices get fewer and the planet gets closer, Clark makes a desperate attempt to stop the station’s descent as he is attacked by the Green Lanterns. Batman and Cyborg are attacked as they get closer to escaping the Watchtower and Diana decides to confront the aliens head on in a gamble that might cause even more destruction.

Have you seen this:
Three Jokers #1 (Review)

After coming off of another alien invasion on the Watchtower issue, this story seemed a little redundant, but it was executed well. Manapul is definitely able to spin a lot of plates with this issue and the story is continued in a way that holds the reader’s interest. The art is both dramatic and dynamic while conveying the tension of the situation. It will be interesting to see how the story concludes.