TumbleSeed is deceptively cute. It presents itself as an endearing little indie rogue-like indie game with a beautifully textured soundtrack, but after 10 minutes in this game, you will realize it is a challenging work of art that demands every bit of your attention, from your head to your hands.

The story of TumbleSeed is of a seed who is prophesied to make the dangerous ascent up a mountain to its summit in order to bring peace and happiness to all its inhabitants. The seed travels up the mountain balancing on a vine that stretches across the screen from one side to the other, serving as a balancing bar. Push the left stick up and the seed tumbles down to the right. Do the opposite to get it going the other way. Even a slight push can get that seed slowly rolling. This mechanic is incorporated throughout the entire experience and makes this game one that is easy to pick up but ultimately hard to master.

Balancing is hard enough but the mountain is paved with a myriad of enemies and traps. From monsters that pop out of the ground leaving holes in which the seed can plummet to its doom, to creatures that fly and slither their way towards the seed, there are a great many obstacles to worry about. Dealing with these enemies is where the 2nd layer of this game comes into focus and ups the ante when it comes to the depth and value of the game.

You have two ways of dealing with enemies - fight or avoid. As you travel up the mountain, crystals lay about waiting to be picked up, and they act as a sort-of currency that governs the usage of your powers. Once your have enough crystals, they can be used to activate the seed’s power by rolling across a seed patch. Early on, my seed had little spikes surrounding it which allowed me to roll it into enemies. As you travel you’ll occasionally come across shrine areas that offer you a brief respite from the dangerous environment and a choice between two new powers. At the tap of a button, you can alternate between varied abilities, such as a tumbleseed that drops a checkpoint or one that lays mines in its wake for a set period of time. 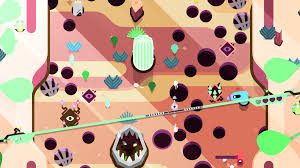 Navigating the seed up the mountain I was asking myself, “Do I get some more weaponry for my seed or should I drop a checkpoint and try to avoid these enemies?” If I die that means I tumble back down the mountain and have to start over - which is incredibly deflating and made we want to toss my Switch across the room on several occasions. So there is more to the game than fighting enemies and avoiding holes in the ground. It’s all about surveying your terrain and the obstacles ahead and in a split second, coming up with a strategy to keep the seed alive and moving upward.

However, an issue that I kept facing was that not all of the seed’s powers are as useful as they should be. For example, there is a power that allows the seed to increase/replenish its health but that requires rolling over four seed patches, spending a crystal each time. The end result is another heart being added to its count but really puts the player at a disadvantage considering all of the work and risk taken to get that heart. While there are a wide array of powers, situations like this lead me to use the same 3 or 4 powers all the way to the top, as it wasn’t worth the risk of using the others.

Considering that this is a roguelike, that means this entire mountain and all of its dangers are procedurally generated. As mentioned earlier, once your seed dies its back to the bottom of the mountain to start over again with the terrain and enemies changed due to being procedurally generated. This can make the game extremely frustrating and ultimately comes down to whether you like that kind of roguelike gaming philosophy or if it’s a complete turnoff.

Outside of the mechanics of the game, TumbleSeed is great to look at. The world is filled with personality,  and the overall game has a quirky and colorful look to it. Environments are quite distinct from each other, featuring a broad palette of colors and set pieces. The music of the game is composed of tribal drums, light guitars and banjos, and some funky ambient forest sounds to produce a very chill vibe. You won’t come away humming any memorable tunes, but it definitely helps set the mood and character of the game. 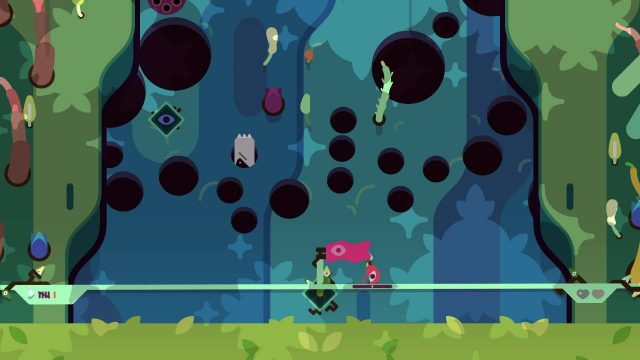 While TumbleSeed is available on other systems, I want to speak on the incorporation of HD Rumble on the Nintendo Switch. As the seed rolls to the right or left of the screen the Joy-Con will rumble more or less depending upon the speed at which the seed is moving. The sensation is one that doesn’t sound too important or even helpful, but I found that I had apparently relied on it quite a bit when I played on the TV with a Pro Controller and the missing sensation made it harder to balance the seed. Therefore, playing in the handheld mode with the joycon controllers attached probably makes for the best experience.

For all of its difficulty and frustrating moments, I ultimately enjoyed TumbleSeed. While there could be more options for the seed’s power, I never once considered it a detrimental hindrance to the game. Anybody getting this game should know it requires quite a bit of patience, but if you aren’t that sort of gamer, then it might be worth it to pass on this title. But if you are intrigued by these kinds of games, I do believe you’ll be satisfied with what it has to offer.