With all the dating apps and sites out there all created to play Cupid, could you imagine one dedicated to tearing the couples apart? Rewind 40 years to 1978. Before the internet. There is such a business. It’s called Heartbreak Incorporated.

A jaded Night Club owner’s wife named Sherri is referred to Heartbreak Incorporated by her lawyer. She wants a relationship destroyed that is between her husband and someone else. Misha; the owner of the establishment, takes on the case as usual. Asks for a name, photo, and place. You find out his ways are very unconventional. That’s an understatement. Misha is also not at all what anyone thinks he is. In fact, he can be whatever you want him to be. He runs into an unexpected challenge and familiar face and for the first time doubts himself. He knows what’s about to happen can only end one way. The following intense, insane events that ensue not only include one specific word that finally reveals what Misha really is, it also displays some very graphic art and despondent that sets up a story you didn’t see coming.

Have you seen this:
Something Is Killing The Children #18 (REVIEW) 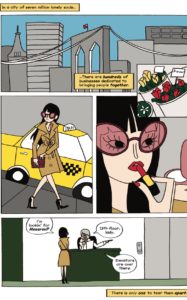 Issue #1 of Twisted Romance is difficult not to spoil in a synopsis! When I started reading it I thought it was possibly a Private Detective Romance thriller. I’m shocked and I’ve never been so pleased to admit I was wrong. This one threw me for a loop. It’s definitely different than anything I’ve read lately. I’m a huge fan of anything that stands alone outside the normal formula. From the art, the characters, the ideas and the plot twists that’s exactly what this comic is doing. It’s set in the past but the ideas are very modern and progressive. There isn’t a massive amount of dialogue and it’s not needed for you to see and understand exactly what’s going on. The art style is completely Katie Skelly’s own. It’s reflective of the time period and amazingly disturbing at the perfect time. The writing is so spot on and descriptive that you actually feel angry for Sherri. This was an unexpected gem. I’m looking forward to issue #2 (of 4)