This Christmas, I want to give my fellow fans the gift that keeps on giving. If you were expecting a Jelly of the Month Club subscription, apologies in advance but this year I’ve arranged for Santa to bring Swamp Thing in his sleigh!

3) Never checked it out.

Whatever camp you find yourself in hopefully, I can please all of you. While the story I’m about to recap wouldn’t be confused as a yuletide yarn, it’s one I consider a classic. Curl up next to a warm fire and cover your chestnuts folks. It’s time to take a look at Swamp Thing Vol.2 #38 “Still Waters” cover dated July 1985 by Alan Moore, Stan Woch and John Totleben.

This story occurs at an interesting time in Swamp Thing lore. Readers today know of him as the Avatar of the Green but he came from humble beginnings. Since his creation in 1971 by Len Wein and Bernie Wrightson and up to this point, he was more of a homogeneous muck monster. Swamp Thing #37 introduced John Constantine, who proved to be the catalyst for some intriguing changes.

Alan Moore had already flexed his muscles and shocked fans in the pages of  Saga of the Swamp Thing #21, but the American Gothic arc is when the true potential of his powers are revealed. The issue we are about to discuss is the first leg of his jaunt across the states in search of self-discovery. 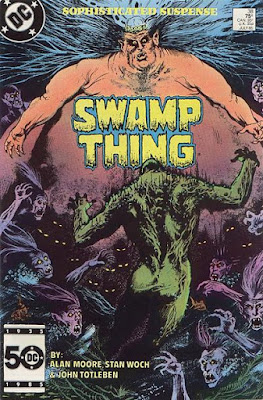 Something that separates Swampy from similar creations is his relationship with Abby. It’s deeply rooted love affair that’s withstood the most unusual of circumstances. We get a taste of that in a beautifully scripted goodbye weaved into the origin of a doomed event. The flow at play here is akin to a delicate, touching lyric. There are moments where Moore so accurately describes the feeling of heartache it could crack the narration box. 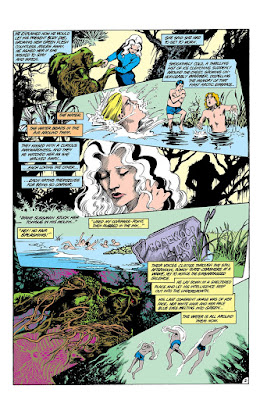 To the uninitiated, a sign for Rosewood, Illinois is of little significance but it’s actually a brilliant tie-in. Previously in Saga of the Swamp Thing #3 by Martin Pasko and Tom Yeates, the town was flooded in an effort to destroy some pesky punk rock vampires. Revisiting history provides fertile ground for Moore. While I’m glad he chose to utilize it, nearby citizens of Rosewood would disagree. The deluged vampires have become quite accustomed to their new environment. Free from the punishment inflicted by direct sunlight, they take advantage and nibble on teenage swimmers. 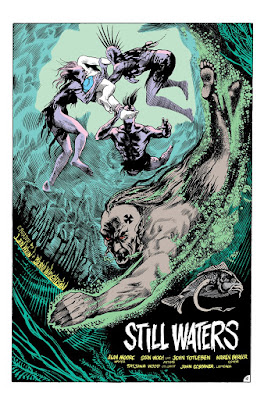 Leeches force the boys out of the water, all except one that is. While he floats looking frozen, the others see shadows under the water and bolt. Promises to return for him echo out as they flee into the forest. The vampires now full after feeding on the forgotten friend, swim away. Their home is the corroded skeleton of the town once known as Rosewood. This will prove to be the breeding place for something sinister.

Meanwhile, Swamp Thing endures an early trip into the Green. While tumbling through what seems like an endless void, he recalls Constantine had instructed to meet him at Rosewood. The mysterious mandate fills his mind with the memories of his first experience with the town as he goes from seed to sprout and eventually stem. 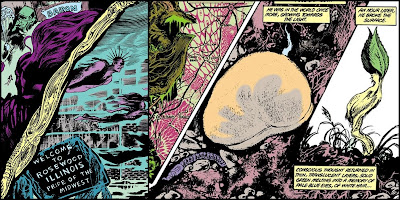 Like her lover, Abby has become lost in a realm of reverie. Her co-worker has confused her daydreaming as concern for her comatose and estranged husband  Matt Cable. Constantine, making his way to meet Swampy is sidetracked by a bumpkin in a bar. The boys argue on what to do about their pal they abandoned at the lake. That particular swimming spot had been forbidden by their parents and only one of them is brave enough to go back. 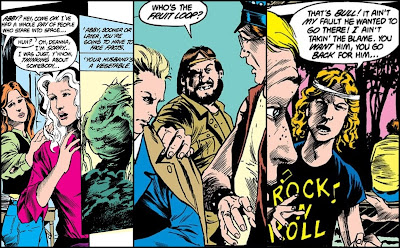 The vampires are in the process of performing a ritual. If you weren’t already creeped out by these parasites distorted by the depths, get a load of this gal. Like a queen bee serviced by the members of the hive, they have mimicked that method to meet their own need. A bloated woman is decorated with a bridal veil. They refer to her as the “Mother” but what is she capable of giving birth to? Here’s another example of a page that reads like poetry. Moore gives just a hint of who she was while implying her horrific purpose. 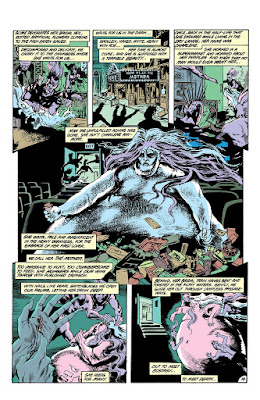 Swamp Thing now fully formed has no patience for the ambiguous information fed to him by Constantine. They stand at an edge of the lake together engaged in hostile conversation. It’s actually a running theme throughout the arc. Swampy is desperate to discover why he exists but has the misfortune of having a chain-smoking shyster as his guide along the way. Constantine continues to crack wise resulting in Swamp Thing taking him by the trench coat in a fit of anger. 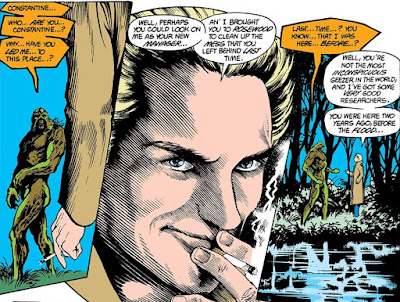 As for that kid with the courage to return to the lake? Yeah, A+ in ethics but a massive fail in execution. Actually, scratch that. An execution goes great, just not in his favor. His buddy now turned undead, leads him to the water where a  group of soggy bloodsuckers quickly turn him into fish food. 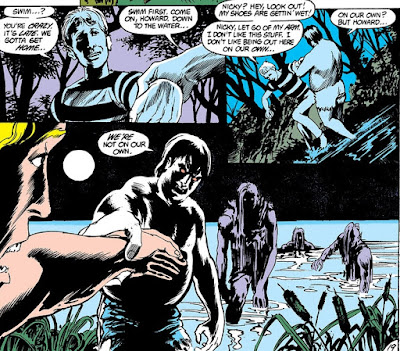 While Constantine is soiling his knickers, the submerged vampires hail their succubus. She ceremonially spawns a set of eggs. Swampy decides it’s time to mop up his mess, releasing a relieved John Constantine. What new species of evil is about to hatch in the dark? You’ll have to come back next month to find out!

The talent involved here is top notch. I’ve gone on about Moore’s writing but the artistic talents are also superb. It’s hard to tell Stan Woch is a fill-in because John Totleben’s inks maintain the consistency a reader would receive from regular series penciller Stephen Bissette.  (Not to mention Totleben is one hell of an all around illustrator, who rightfully took center stage on key issues and covers.)

I highly recommend to not only pick up this two-parter but as many issues of this run you can get your grubby fingers on. They are inexpensive and easy to collect. Permit me to be a cranky old bastard for a second here; it boggles my mind that fans put so much value on first appearances, variants and allow speculation to affect sales. What about content? Tales such as these are priceless and should truly be sought after.

It’s probably not a surprise that Swamp Thing is my favorite DC character and I consider this the greatest turn taken on a comic. Hands down and without hesitation, these are mags I would want buried with. Feel free to check my will!

When discussing it within the community, I often hear it described as a great horror title. Sure, I know it’s scary on the surface although if  I’m inclined to apply any tag, I would choose to call it a love story. Possibly one of the finest ever told.

Skip the sweets this year and stuff your loved one’s stockings with Swamp Thing. This epoch is available digitally on Comixology and in trade form. Or better yet, hit those bins and remember…never leave a good book behind.

*all links are intended for informational purposes only*