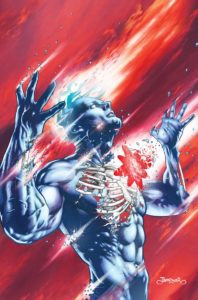 The Fall and Rise of Captain Atom #1
DC Comics

Written by: Carey Bates and Greg Weisman
Art by: Will Conrad
Colors by: Ivan Nunes
Letters by: Saida Temofonte

It’s 2012 and Nathaniel Adams is trying to be both the hero he was and the being of immense power that he has become. Captain Atom, it seems, has developed a condition that is causing the atoms that collapse and reform within him to release discharges that are becoming increasingly more destructive. As Dr. Megala works to contain this power, General Eiling looks to contain any information from getting out about the experiments that The Continuum are conducting. A task that is complicated by Captain Atom’s need to help people in trouble. This need threatens to wreak havoc on the populace and the Justice League must intervene not only to help Captain Atom reach the safety of the Continuum facility, but to protect the population from the ailing superhero as well. 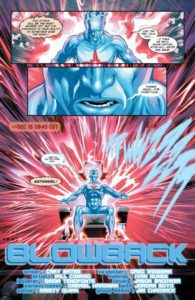 In 1987, after Crisis on Infinite Earths, DC Comics brought in a new creative team who revamped the character of Captain Atom into who we know today. The team that re-energized (pun intended) the character were Carey Bates and Greg Weisman. Almost thirty years later, that creative team returns for this limited series. The story by Cary Bates and Greg Weisman gives the sense of power, majesty and morality of the character while reminding the reader of the tragic consequences and dangers of Captain Atom’s unstable powers. Will Conrad’s art is very well done. It conveys both the beauty and destructive power that Captain Atom wields.

The Rise and Fall of Captain Atom #1 is a well plotted and engaging first issue. The creative team knows this character inside and out and it will be interesting to see what twists this story takes in the next few issues. The artwork conveys power and pain in its depiction of Captain Atom.