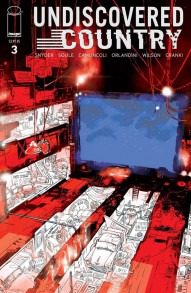 Scott Snyder and Charles Soule’s continued development of Undiscovered Country’s characters and the story’s plot is unparalleled. Every detail matters, yet nothing is forced — which may be the most efficient way to summarize Undiscovered Country #3.

Among the group visiting America — who the story is centered around — it’s been clear who the main characters are. Normally, it might not seem necessary to spend too much time giving the story’s supporting characters backstories, at least this early.

Not only is it now clear that the Snyder and Soule want to provide a greater understanding of each character, but it’s also evident each individual’s background is far more significant than we, or the council that put this group together, knew.

(WARNING: Spoilers for Undiscovered Country #3 ahead.)

Through the first two issues, Dr. Ace Kenyatta’s presence didn’t seem nearly as significant as the Graves’ or even Valentina Sandoval’s. Clearly, there’s a lot more to this guy than we were initially led to believes.

Because this guy isn’t just an expert on America. This guy is so damn brilliant that smart people think he’s off his rocker, because they can’t keep up with his line of thinking.

And now he’s given us some insight into why America is this dystopian wasteland. But with this info comes more questions. How did this all happen? Can it be stopped? Why does Kenyatta think he and the rest group are stuck?