Update: ‘Swamp Thing’ series star Virginia Madsen has confirmed on Instagram that the series has been cut short. “I’m beyond sad. What a terrible decision. We have been cut to the core by those who have never set foot into the Swamp.” 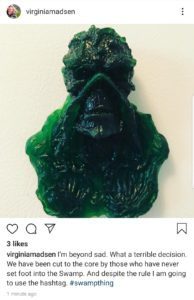 Rumor: According to a local news outlet in Wilmington, North Carolina, crew members on DC’s ‘Swamp Thing’ were informed they will be wrapping things up a bit early.

While originally scheduled to film 13 episodes through May in Wilmington, the show will now wrap at just 10 episodes with a new ending currently being written. The outlet also says that WB may be shutting down production early to evaluate the future of the DC streaming service, DC Universe. This does seem like speculation though. We have reached out to WB for comment. It is unclear how this affects other DC Universe shows in production.