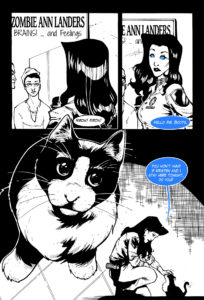 Created and Written by: B.J. Mendelson
Art and Letters by: Piotr Czaplarski

This Sci-fi/Horror/Superhero comic is unique as hell and had me guessing  IMMEDIATELY what was happening. That’s exactly why I was intrigued to keep reading.

Kristen is a police officer who seems to be in a post-apocalyptic world which may only be in Nevada, guess we’ll have to wait and see. The state is clearly significant. We find out that there are a few family secrets. They catch up to her. While at first, I had a bit of a hard time understanding some of who the characters were, the further I read and the more I saw, I understood the world the that was being created and an awesome band of misfits team of heroes that I can’t wait to see work together! It’s a mythology the writer is creating and he waits until the very end to show exactly what it. Kristen, to me, seems to be a former teammate may that may have just became a villain, and not by her own choice.  Also, I caught the word zombie once or twice in a poster and a T-shirt. Is that a hint? 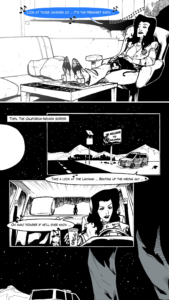 I really enjoyed the mash-up of genres. The fact that it turned out to be a superhero comic was something I did not see coming and I was pleasantly surprised. Sidebar… THERE’S A BEAR on the team! Now, of course, I have to read it. In all seriousness, it has the tone of a Justice League Dark possibly in comparison to it. Only because there’s magic and mythical heroes. I’m very intrigued by exactly what the force is that of the main antagonist. It has a history with the main character’s mother.

The writing is great because I saw that the creator was clearly invested in the world he’s building, the beginning backdrop for the issues to come. The art is fantastic. The black and white style with only spots of color throughout. The color was clearly to emphasize certain characteristics and the importance of some part of the story. I recommend this comic to anyone who enjoys these genres!