So we are back in the land of the killer zombies and power-hungry madmen with Telltale Games’ newest Walking Dead title, A New Frontier. Now having only played the very first Walking Dead title a while back, I was concerned I was going to be a bit lost if there is a contiguous story, but thankfully A New Frontier feels like a new story altogether. It starts off with the main character of the game, Javi, desperately running home to try to catch his father’s dying breath and that’s when the option based gameplay takes over and things start going drastically wrong for Javi. After a rather unpleasant last goodbye with his father, the story quickly fast forwards to Javi and his family traveling across the U.S in their Van trying to stay ahead of the Herd (Lots and Lots of Zombies all going the same way). While making one of those classic ‘We need Fuel and Rest “Walking Dead Style” stops’ Javi stumbles on someone else’s patch, and he isn’t happy about it. 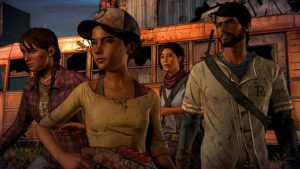 Quickly we find Javi and his family fighting for survival. One of the reasons I stopped watching the show was because of the same old “we need supplies but they are surrounded by a thousand zombies or a mad man” scenario and the game is pretty much the same. That’s unfortunate if you’re also tired of that scenario.

As much as I like how Telltale expands certain universes, I can’t help but feel bored by their games. The visuals are really nice and are done in the classic comic book style like all of their titles but the actual dynamics of the game just feel childish. I don’t mind the odd tutorial but being told to press a certain button or key throughout the whole game gets very tedious, very quickly. To me, it’s just not challenging enough. Even when a chance came to blow a few brains out the targeting system was way too generous and what would be a huge miss on any other title was a dead on headshot here. There is no doubt anyone who loves the Walking Dead will love this new installment and the characters involved but for me, it just wasn’t enough. Don’t get me wrong some of the characters are excellent and have good background stories but I forgot all about that when I got told to move to the left for the hundredth time to miss a walker. Maybe I’m missing the point and that’s it’s more about the choices and the story that comes after those choices rather than the actual gameplay. I guess what I’m saying is I still had an itchy trigger finger after playing this and felt like I’d watched a Zombie Soap Opera rather than play a video game.

Telltale have got a great rep in making great games and no doubt that’s justified but I think once you’ve played one Walking Dead you’ve played them. Overall, fans of the Walking Dead and Telltale games will probably love A New Frontier, as for me it left me feeling like a Walker.