War For The Planet Of The Apes Review

The Good
I really appreciated the introduction of this movie starts off with a very quick and efficient recap of the past two movies. If you only vaguely remembered the previous Apes films, that recap gave you just enough information to get you all caught up.

Probably one of the greatest strengths of this film is its characters and their development. The most amazing thing about this movie is that you will become invested in almost every single character (ape or human). Even the deaths in this film will feel meaningful. Not only that, but the characters are not one-dimensional. There are very few characters that are bad just to be bad, for example. They’re all complex and so are their motivations.

I loved how the characters and the plot were not entirely predictable either. Certain characters will appear to be motivated to do something, but then end up doing the complete opposite of what you may expect. Their motivations really drive the story and keep the characters from being stale or boring. Don’t be surprised if you have a difficult time in trying to choose a side to root for or support.

One character you’ll have no problem supporting is “Bad Ape”. He was most definitely the much needed comic relief in the film. I really appreciated how they didn’t overdo his character by forcing him to be too funny.

Director Matt Reeves should certainly be deserving of some praise for this film. (Dare I say he needs award consideration too!) I never paid a lot of attention to a movie’s musical score until I heard a bad one in All Eyez On Me. (TuPac’s death scene with the random gospel song.) That’s when I realized how the musical selection can potentially captivate or detach you from the emotional impact of a scene. This film played just the right songs to match the intensity of battle or drama of an emotional moment. Besides the score, there are some really great scenes that are captured through some excellent cinematography.

While the majority of this film and characters are mainly CGI, Andy Serkis needs to be recognized here. He used facial capturing technology to play Caesar, and he delivered a spectacular performance with what I like to call “Facial acting”. (Facial acting is when someone can perform and convey ideas with just their facial expressions.) Without even using many words, you knew and connected with almost every single one of Caesar’s emotions and inner thoughts. I’d be disappointed if Serkis didn’t get some award recognition during award season.

As far as the story goes, it was probably one of the most dramatic and emotionally driven tales of all the Ape movies to date. It touched on so many themes that explored the impact of war, survival, oppression, and revolution.

The Bad
The length of this film, which is almost 2.5 hours long, is kind of tricky. There were a couple of slow moving parts in the film that probably could’ve been skipped. I think there are just a few large gaps between the intense action scenes, which may make the film feel like it’s dragging a little bit.

I think part of the issue with the slow pacing has to do with the fact that this movie is not the action-packed, war film the trailer makes it out to be.  War For the Planet of the Apes is like 80% drama and only 20% of actual fighting. (The last battle is certainly the best one.)  Similar to Dawn of the Planet of the Apes (the 2nd Apes movie), there just wasn’t as much action as the trailer may have portrayed. So expectations will have to temper down a bit if you were expecting a lot of fighting.

Maybe this is nitpicking, but I could’ve sworn I noticed some apes hearing sign language. (Yes, you read that correctly.) For example, there’s a scene where an ape is using sign language behind Caesar (and Caesar isn’t looking at him), but yet Caesar acts like he knows what was said. This is probably easy to miss if you’re too busy reading the subtitles.

This movie was so good that it made me start second guessing myself when I thought of the apes in the film. Like I started becoming more politically correct about what I thought about them. Saying “Oh, they’re acting more human” just started to feel wrong or discriminatory. By the end of the movie, I was saying to myself #AllApesMatter! (You may now commence judging me.)

This movie will be presented in 3D, but I don’t think that it’s necessary. There really wasn’t anything in the film that popped out at you that really required it to be viewed in 3D. However, I would say that War for the Planet of the Apes is still a must watch. If a movie can grip your emotions, whether that be to hate certain characters or sympathize with others, then it has accomplished its goal. This movie achieves that and doesn’t monkey around! (I welcome your tomatoes!) 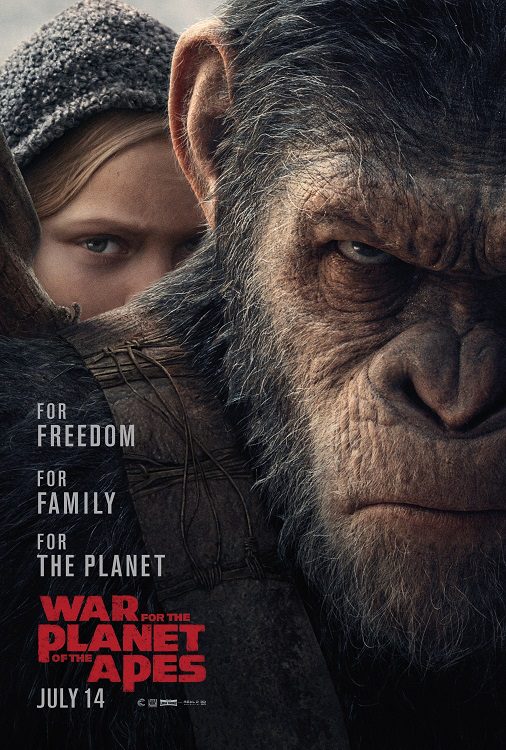