Under their belt, Warrant has eight million records sold worldwide, two Top Ten Billboard albums, five Top 40 Billboard hits, five #1 MTV videos…the list goes on and on. Now, six years after the release of “Rockaholic,” the album that re-launched the band as a force to be reckoned with in the 21st Century, Warrant returns with another slab of muscular hard rock, aptly titled “Louder Harder Faster”. 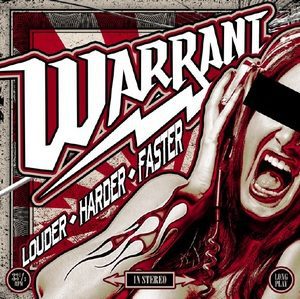 With a line-up featuring original members, Erik Turner, Jerry Dixon, Joey Allen, and Steven Sweet along with singer Robert Mason (Lynch Mob, Cry of Love), Warrant are now stronger than ever. Mason’s vocals remain a breath of fresh air and his swagger on the songs gives new life and a bright future to the band. With production handled by Foreigner and ex-Dokken bass player Jeff Pilson (Last In Line, Starship, Adler’s Appetite, etc.). Warrant is sounding tighter and playing better than ever before. “Louder Harder Faster“, true to the band’s roots, is full of rockers with some classic ballads thrown in and sure to send their faithful fans into a frenzy.

WARRANT’s signature style of rock is catchy, very melodic, and remains the band’s calling card. The band is fired up and more inspired than ever musically!

Louder Harder Faster metal monday Warrant
Are you an Insider?News, reviews, & updates are just the beginning.