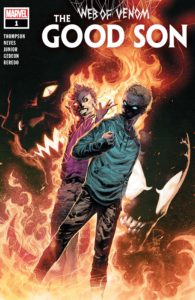 I’m familiar with the Green Goblin, but I’m slowly learning about Eddie and Venom. I know about Venom, just not so much about Eddie. This comic was interesting. The son of Eddie, and the grandson of the Green Goblin brought together under one roof, each battling their own demons. Part of their DNA? Not quite sure.

The story is a good introduction to these two new characters and hints at the possibility of a new breed of hero/villain. The art is sleek, as modern comics tend to be, but, I just have one, little complaint… On more than one occasion, the kids look like Chucky. Yeah. The killer doll. They don’t look young, they don’t look innocent, but like someone tried to draw Chucky with different-colored hair. But besides that, the art was great.

There’s not much to say about this issue, as it feels like it ended as soon as it started. There is a lot of story and back story crammed into this one issue to try and set-up this story arc, so I hope the next issues aren’t as crammed, and allow the story to flow smoother. Overall, I’m intrigued to see where this story goes. With the kids under the influence of their family’s pasts, and struggling with their demons on their own, it’ll be interesting to see whether they go, hero or villain.